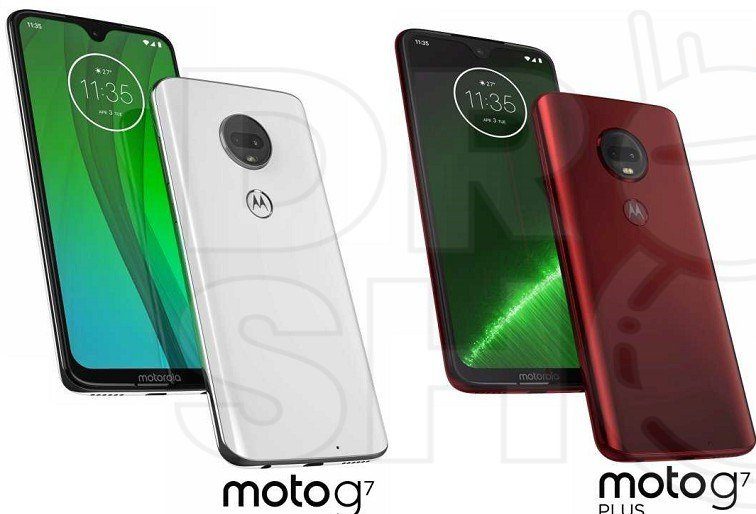 Motorola has accidentally leaked the specifications of its Moto G7, G7 Play, G7 Plus and G7 Power smartphones, ahead of the official launch. While the company was expected to unveil its G7-lineup on Feb 7 in Brazil, we already know most of the things about each of the G7 model, counting in the design and specifications.

Spotted by the folks at CNET Espanol, the Moto G7 family was listed in its full glory on the Motorola’s Brazilian web store. It was taken down soon after CNET reported the company. Fortunately, the publication managed to pull out all the essential information including detailed specifications of all the four smartphones.

Starting with the design, the Moto G7 and Moto G7 Plus feature a full-view display with a waterdrop notch on top. A chin with Motorola branding accompanies the same. Getting over to the back, you can see the horizontally stacked pair of dual cameras, housed in traditional Moto-styled circular camera modules on both the models.

On the other hand, the Moto G7 Play and Moto G7 Power seem to have traditional notched displays with a similar chin at the bottom. Notably, both these handsets get single cameras at the back. All the four smartphones have their fingerprint scanners embedded into the companies batwing logo at the rear. That being said, let’s now talk about the specifications of each model.

Under the hood, it’ll be powered by Qualcomm Snapdragon 632 SoC, clocked at 1.8GHz. It further incorporates 4GB of RAM and 64GB of internal storage.

The Moto  G7 features the same 6.24-inch FHD+ display with 403ppi as on the G7. Do note that the G7 Plus is powered by Qualcomm Snapdragon 636 chipset, instead of the 632 on the G7. The device has 4GB of RAM alongside 64GB storage for the base variant. Nonetheless, we may also see a 6GB RAM variant with 64/128GB storage.

In the optics department, the Moto G7 Plus bears a 16MP primary shooter with f/1.7 aperture clubbed with a 5MP f/2.2 unit at the rear. Furthermore, it gets a better 12MP selfie shooter with f/2.0 aperture.

The Moto G7 Play, on the other hand, would be an affordable smartphone by the company. It offers a 5.7-inch HD+ display with 1,512×720 pixels and 294ppi. Notably, it gets powered by Snapdragon 632 SoC, coupled with 2GB of RAM and 32GB of storage for the base variant.

For photography, there’s a 13MP single camera with f/2.0 aperture at the rear, followed by an 8MP selfie shooter with f/2.2 aperture. Moreover, it runs Android 9 Pie and has a 3,000mAh battery.

Connectivity options like 4G LTE, Bluetooth 4.2, Wi-Fi 802.11n and a USB-C port are given onboard. It measures 159.4x76x9.3mm and weighs 193 grams. Worth mentioning, all the four devices tout NFC support for selected regions.