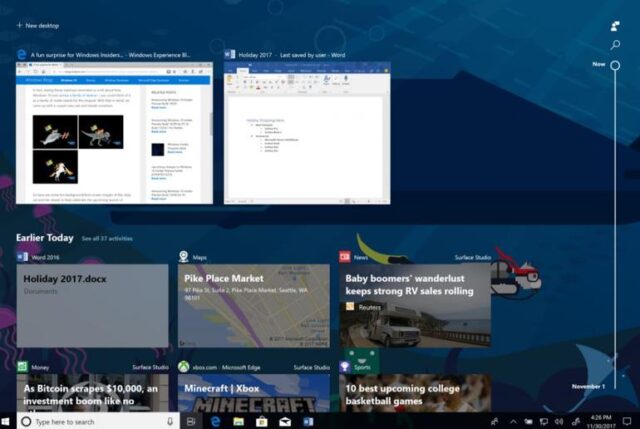 Microsoft has brought the promised Timeline feature with its ‘Redstone 4’ test build 17063 which also includes the start of Edge support option for its Progressive Web Apps with numerous UI tweaks and some IT pro dedicated goodies. Microsoft released its Build 17063 to the Windows 10 Fast Ring Insiders for PCs on 19th of December. Officials confirmed that the best feature about this new Build 17063 is the Timeline which was announced in late November for the next Fast Ring test build.

The newly introduced Timeline is an extension of Windows 10’s present Task View option. The new addition shall allow the user to access their past activities while providing them with cards that shall open ways to help them re-engage with the applications on Windows PCs, iOS as well as Android Devices.

The Microsoft officials showcased their Timeline at Build 2017 while introducing some features that were planned to be a part of Windows 10 Fall Creators Update. However, the Timeline feature never got incorporated into any of the Windows 10 Fall Creators Update test builds. This was when the officials decided to postpone the release of Timeline. Now Microsoft has been engaging with the developers to update their application in accordance with Timeline.

As of now, testers for the preview of Timeline feature can see as well as resume web-browsing activities in plus Office, Edge as well as the UWP versions of News, Money, Maps, Weather, and Sports. The Timeline carries an activity history settings page that enables the users to determine which accounts get to appear in the same as work, school or personal account.

April 2018 shall mark the official launch of Redstone 4 which is most likely going to carry along with it the Timeline feature. However, confirmation for the same hasn’t been obtained from Microsoft officials regarding the Redstone 4. Apart from the Timeline, Sets may or may not make it to the final Redstone 4. This means only some specific Fast Ring testers might get access to Sets which is also known as Microsoft’s new window management feature as far as the recent build is concerned but most of them won’t be able to access the same for a small period.

Now users can get the same set of activities that appear in the Timeline from numerous devices by Cortana which suggests users the activities they might want to resume from. Microsoft is also changing the overall look and feel for Cortana Notebook that includes its build, tabbed view option along with a new Organizer starting point to access lists and reminders with ease. Cortana shall also be able to control music playback on numerous music apps like Spotify in US-English version only.

The Settings homepage has been transformed to be visually more appealing. Microsoft is also bringing influent design to its Settings, Taskbar, Share UI, Calendar and Clock along with other fly-outs. The new test build houses feature that are meant to appeal the consumers as well as the business users. The Windows 10 Professional shall get Windows Defender Application Guard technology which shall not be limited to enterprise only. It helps the users isolate potential malware as well as exploits.

Microsoft’s blog post for 17063 also lists numerous other fixes along with improvements that shall be a part of this build in a variety of areas such as storage, memory, Cortana, sharing and many others. The new features also list numerous known issues that include touch and pen, Edge notifications and others.