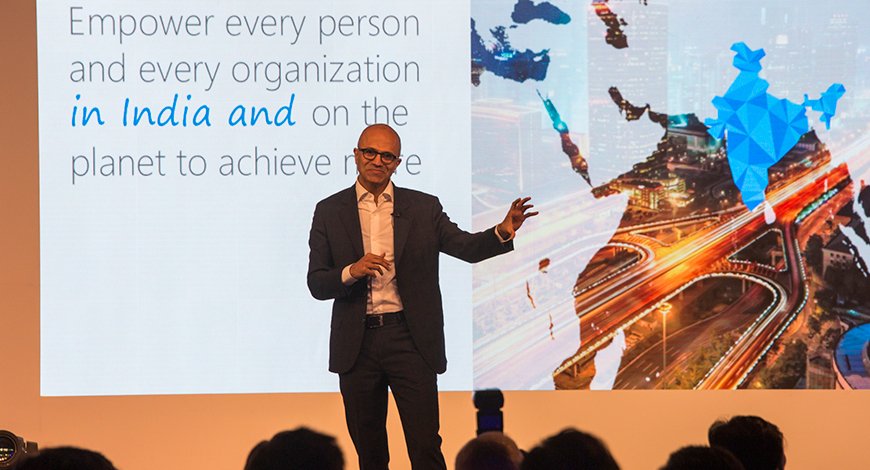 The Hyderabad-born Global CEO of Microsoft, Satya Nadella, visited the country today for the third time in seven months. In his one-day trip to India, Satya Nadella met with Communications and IT Minister Ravi Shankar Prasad as well as young entrepreneurs and developers from different parts of the world. Other than that he also caught up with Prime Minister Narendra Modi later today.

Microsoft organized an event titled ‘Tech For Good, Ideas for India’ in New Delhi. Here, the Microsoft CEO addressed the fact that developers and entrepreneurs in India are playing one of the most significant roles in driving innovations in India as well as in the International front. He also focused on how technological innovation will play a catalyst role in taking the country forward.

Satya Nadella while delivering the keynote in Taj Palace said, “It is heart-warming and an inspiring moment for me to be here and see this broad spectrum of student developers, entrepreneurs, artist and even some big brands and e-commerce companies. They all will play a major role in changing the landscape of India and thereby the world.”

He talked about how every time he visits India it makes him more energized by looking at the creativity around. He also stressed on how computer and poetry have been the passions that have driven his dreams throughout his lifetime.

He also emphasized the importance of Augmented Reality and on startups such as iBot-maker of the world’s first connected processors that creates the Internet of Your Things. Mr. Satya who came with a dream to empower India said, “It is not about celebrating our technology, but it is about celebrating the technology that India’s create.”

Also taking on this event was Jayant Sinha, Minister of State for Finance, who addressed on how Microsoft can play a vital role in the growth of India. Also, he asked Satya Nadella to take into consideration that the innovation done in Silicon Valley will not work for a town like Hazaribagh.

But what needs to be taken into consideration is that Satya Nadella visit comes at a time when some days back Apple CEO Tim Cook visited the country.