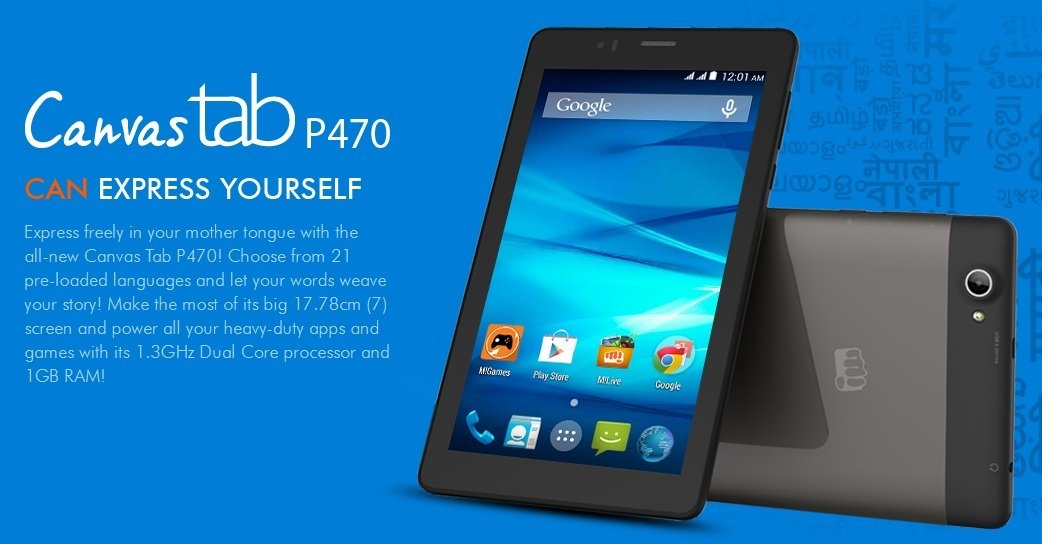 Micromax truly wants to rule the Android market in India. After introducing its new YU lineup of smartphones that run on CyanogenMod ROM, the company has just introduced a new tablet device aimed at consumers who want a tablet on a budget. Micromax Canvas Tab P470 costs only Rs. 6,999 and is available to purchase since December 20.

The exclusive feature of this tablet is its extensive support for languages. It packs 21 local languages, which many consumers may find useful for themselves or their children. As the price suggests, it’s a fairly low-spec’d tablet device boasting a 7-inch IPS display that has a resolution of standard 1024 x 600 pixels. It runs on a 1.3 GHz dual-core processor and Android 4.4 KitKat OS.

Other than that, the Micromax Canvas Tab P470 has dual SIM card slots, one of which supports 3G network. Hence one can use this tablet for calling purpose as well. The device has a 5 MP camera on the back and a 3 MP camera on the front, so selfies will likewise be of good enough quality. The tablet packs a 3,200 mAh battery which can last quite a long time.

Micromax Canvas Tab P470 does not come with any high customization from Micromax, which means consumers will have a pretty much stock Android experience on the tablet. It comes with the usual Google suite of apps such as Google Chrome, Hangouts, Google+, Google Drive, etc.

It may not be the perfect tablet in the market right now, but for average web browsing, PDF book reading, video calling on Skype or voice calling using your SIM card, this tablet can be the best bang for bucks — especially since it runs on Android 4.4 KitKat, a not-so-old version of Android.