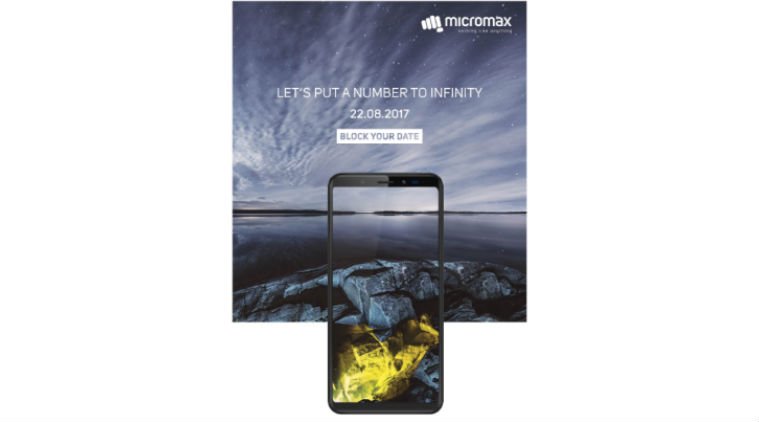 After announcing all-new Evok Dual smartphone, the Indian smartphone maker Micromax is all set to launch the new “Infinity” series smartphone in India. The company has started sending press invites for the launch event going to be held on August 22.

The press invitation includes a teaser image which comes with a punchy tag line “Let’s put a number to infinity”. The teaser also contains the brief design of the smartphone which gives a glimpse of the bezel less display with an 18:9 aspect ratio. The handset image looks quite similar to LG Q series handsets. Moreover, the front end of the device also suggests that it will be equipped with a proximity sensor and front facing camera with no home button on it.

As per our speculations, the handset will target the mid level market segment with a price tag of Rs 20,000 price bracket. Micromax is currently having a tough time in Indian smartphone market as they are outclassed by the numbers of popular Chinese brands in the segment. Their current offerings are not able to create enough buzz in the market, and they are not able to recreate the history like popular Canvas series handsets.

The company is performing reasonably well in entry level market but the magnitude of competition has been increasing day by day and company should opt for a proactive business approach in upcoming and future offering in order to hold on the market. As we hope that this upcoming Infinity series handsets can able to turn the table for the company and regain its brand identity.