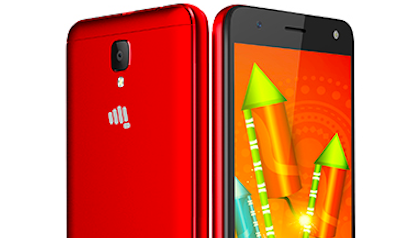 Both the devices run on Android Oreo (Go edition) out of the box; the Bharat 5 Infinity Edition is already up for sale in the market while the Bharat 4 Diwali Edition will go on sale starting from Nov 3. Do note that the company hasn’t revealed anything about the display resolution and processor used on both of the devices. That said, let’s talk about the specs in detail.

The Micromax Bharat 5 Infinity Edition sports a 5-inch HD+ display with a layer of 2.5D curved glass on top and an 18:9 aspect ratio.

Furthermore, the handset packs in 1GB of RAM and 16GB of Internal storage which can be expanded further up to 64GB using the given dedicated MicroSD card slot.

In the optics department, the handset bears a 5MP rear shooter followed by a 5MP front shooter (LED flash on both the sides). As of the software, it runs on Android 8.1 Oreo (Go edition)- a lite version of android designed to give fluid performance even on low cost smartphones.

Lastly, it is powered by a large 5,000mAh battery and is further equipped with face unlock along with the fingerprint scanner at the back.

The Micromax Bharat 4 Diwali edition is a toned down version of the aforementioned. It too packs in a 5-inch display but the resolution must be FWVGA.

Just like the Bharat 5 Infinity, it comes with 1GB of RAM, clubbed with 8GB of internal storage which can be expanded via a micro SD card.

The handset features a 5MP rear camera and a 2MP front camera, both being aided by LED flash. It skimps on fingerprint scanner and solely relies on Face unlock instead.

Lastly, it too boots Android 8.1 Oreo (Go Edition) and draws its juice from a 2,000mAh battery.

As far as the pricing is concerned, the Micromax Bharat 5 Infinity Edition is priced at Rs. 5,899 while the Bharat 4 Diwali Edition costs Rs. 4,249, both the devices will be sold via offline and online stores. The company has also partnered with Reliance Jio to offer additional 25GB of 4G data (5GB additional data on the recharge of Rs.198/Rs.299 for a maximum of 5 recharges).