By introducing their TV range in India last year, Xiaomi has managed to disrupt yet another line of products in the market. To continue with the trend, the brand just announced two Smart TV’s and a Soundbar just last month. We reviewed the Mi Soundbar a while back and now its time for the MiTV 4A Pro.

The new Mi LED TV 4A Pro 43 replaces the last gen MiTV 4A model while coming in at the same price of INR 22,999. The new model runs on the latest Android TV platform while still carries Xiaomi’s own Patchwall UI, giving you the ability to switch between the two. To know what else has changed, let’s dive into our review.

The TV has a fairly simple design and resembles the outgoing model. The bezels are kept to a minimum and run along the sides. They have a glossy black finish and add a character to the TV. When viewing the TV from the side, you get a clear idea of how slim the overall construction is. To ease up the process of adding multiple inputs, Xiaomi has shifted all the ports to the right side of the TV and the inputs are all lined vertically.

The whole construction is done with plastic which is to be expected from a product at this price point. There is no wall mount in the package instead you get two legs which are also made out of plastic and don’t look that much sturdy. Once the base is attached and the TV is placed on a table, you will notice slight wobble at times which can be scary, so we would recommend going for a wall mount, just to be safe. 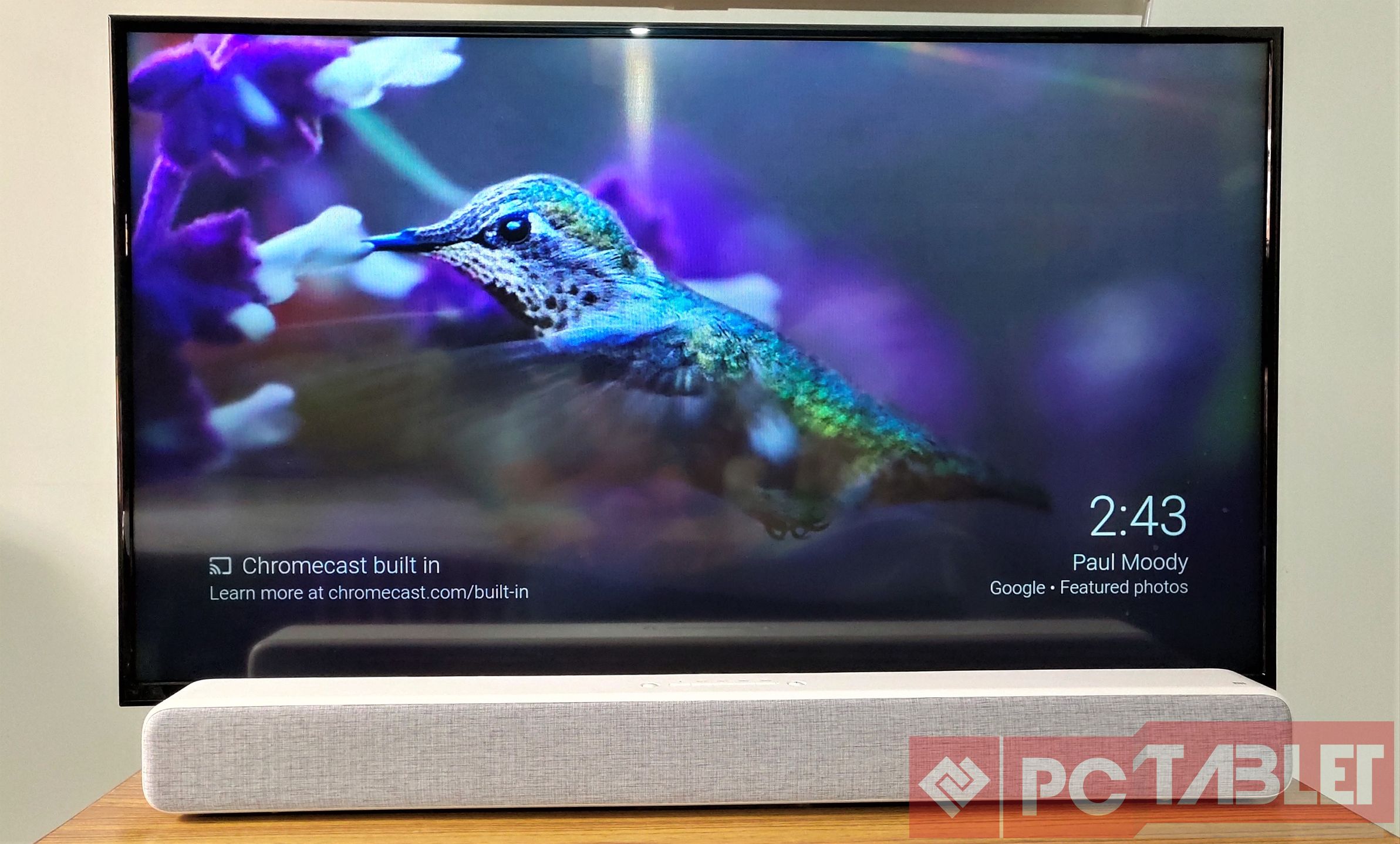 You get just one physical button on the TV, which is placed on the front, below the Mi logo and acts as a power button. There is an LED as well placed in the same location and lights up once the TV is powered on but for some reason, it doesn’t keep lit up. What you do get with the TV is a mini remote with just basic keys and no number pad, leaving you with no choice but to use multiple remotes.

One area where we find improvement is the panel quality, the MiTV 4A had a lot of complaints with its panel being paper thin leading to not so good results. There are two downward firing 10W units placed on each side that come with DTS HD support.

When it comes to connectivity options you the similar set of inputs that the MiTV 4A model had. There are three HDMI ports with the first one being ARC compatible. Along with this you also get three USB 2.0 ports, RCA input, S/PDIF output, and TV antenna input. 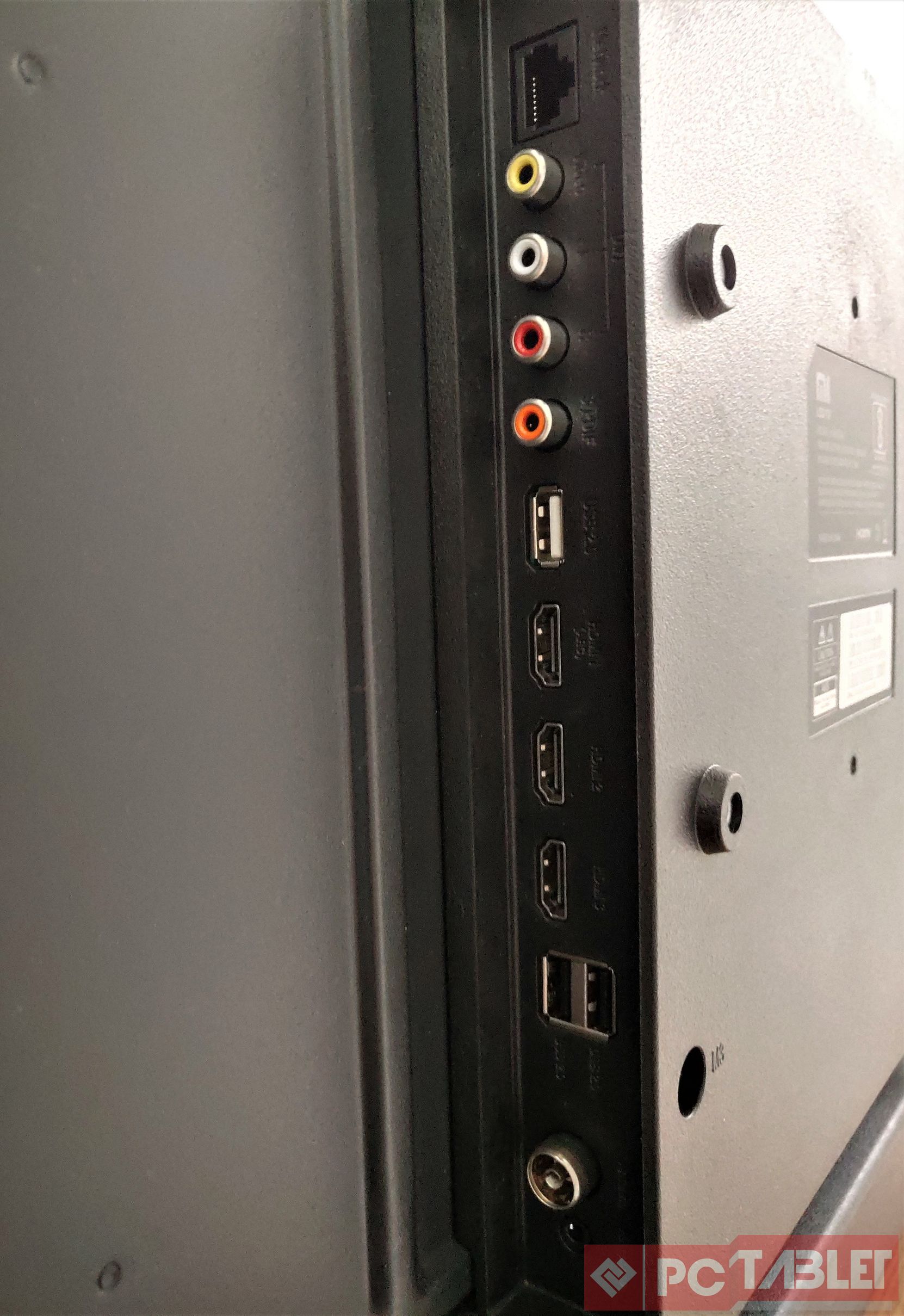 For people still using an older gen music system, there is support for 3.5mm line out which will come in handy while hooking up the system to the TV. For power users there is an ethernet jack present, so you can essentially hook a direct internet line to the TV.

When it comes to wireless support, the TV comes with support for single band Wi-Fi along with Bluetooth 4.2 connectivity which was missing on the earlier model. The addition of Bluetooth opens the TV up for a variety of other peripherals like perhaps a mouse and a keyboard, or a pair of Bluetooth headphones.

Since the MiTV 4A Pro is a certified Android TV, you essentially get the official Android TV build which is based on top of Android 8.1 Oreo. With the Android TV build, there is support for Google Play Store using which gives you access to a host of apps. But after a while, you will notice that there are not a lot of app in the store that you can use. That being said, the TV does comes with a few Google Apps like keyboard, WebView, Google Play Movie, and apps like Gallery, video player, and YouTube.

Despite using the Android TV OS, Xiaomi did add Patchwall UI to the mix and you get the ability to switch between the two using the supplied remote. There are few minor tweaks in this version of Patchwall, like the background changes according to the tile you are on. On the core there are no changes at all and Patchwall still comes loaded with content. 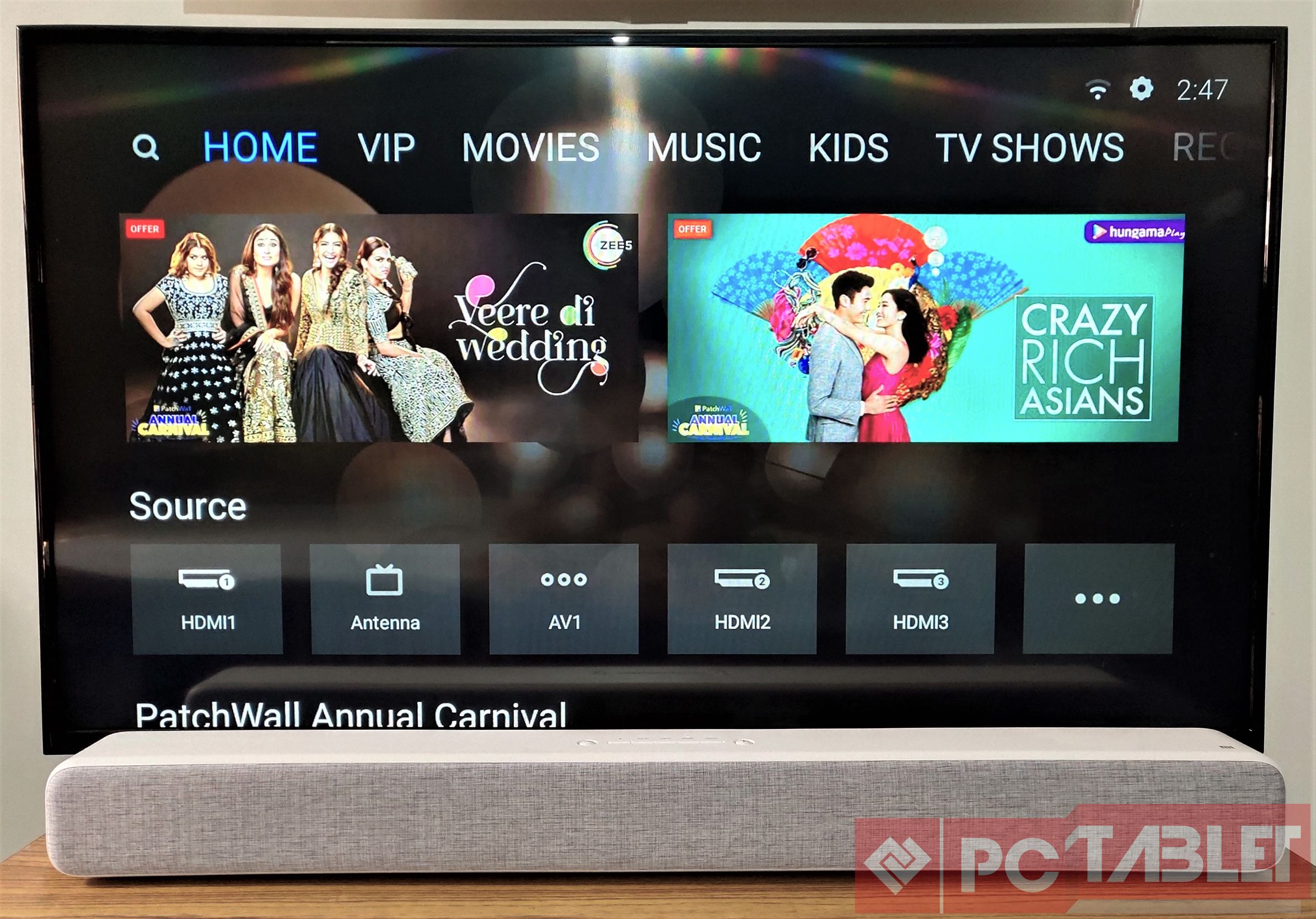 Coming to the main issue, the MiTV’s still lacks support for both Netflix and Amazon Prime Video. You do get streaming apps like Hotstar, Zee5 but miss out on the two most popular and content-rich apps. The company has claimed in the past that the support for both Netflix and Prime Video will indeed come to the MiTV but there has not been a clear timeline for that. We did manage to run Amazon Prime Video by sideloading it but Netflix didn’t really work.

Since its an Android TV, you get support for Google Assistant through which you can essentially change between inputs, load up content just by giving voice commands. Another area where the Assistant is helpful is controlling smart devices placed in your house. The Assistant can be accessed via the remote which has a dedicated button on it.

So, the bottom line here is, if you are one of those millennials who is heavily invested into the streaming apps ecosystem then you would prefer the Android TV more leaving the Patchwall to people watching content over DTH due to the better content aggregation.

The center of attraction here is the 43-inch Full HD panel used here, as previously mentioned, Xiaomi has stepped up their game in terms of panel quality and this time it is evident. We get a Direct LED (DLED) panel meaning this is actually an LED panel unlike the previous LCD panel on the MiTV 4A. Out of the box, TV comes with a warmer color tone set which looks washed out. We highly suggest you tweak the colors and other parameters according to your taste.

After setting the color tone, we ran a bunch of tests with various inputs ranging from PS4, FireTv Stick and video sources from external drives and the picture quality actually came out to be very decent. The panel comes with a standard 60Hz refresh rate making it not the best choice for gaming but that is to be expected. That being said, the panel has deeper blacks which are always a plus and gets fairly bright. To take the experience up a notch, there are features like local dimming.

In terms of RAW performance, the TV comes with an Amlogic 64bit Quad core CPU coupled with 1GB RAM and 8GB storage. Out of this 8GB storage, you are only left with about 2GB since the rest of the memory is eaten by both Android TV OS and Patchwall. When it comes to content upscaling the TV works fine but we will highly suggest you switch to an HD DTH connection for better viewing experience. 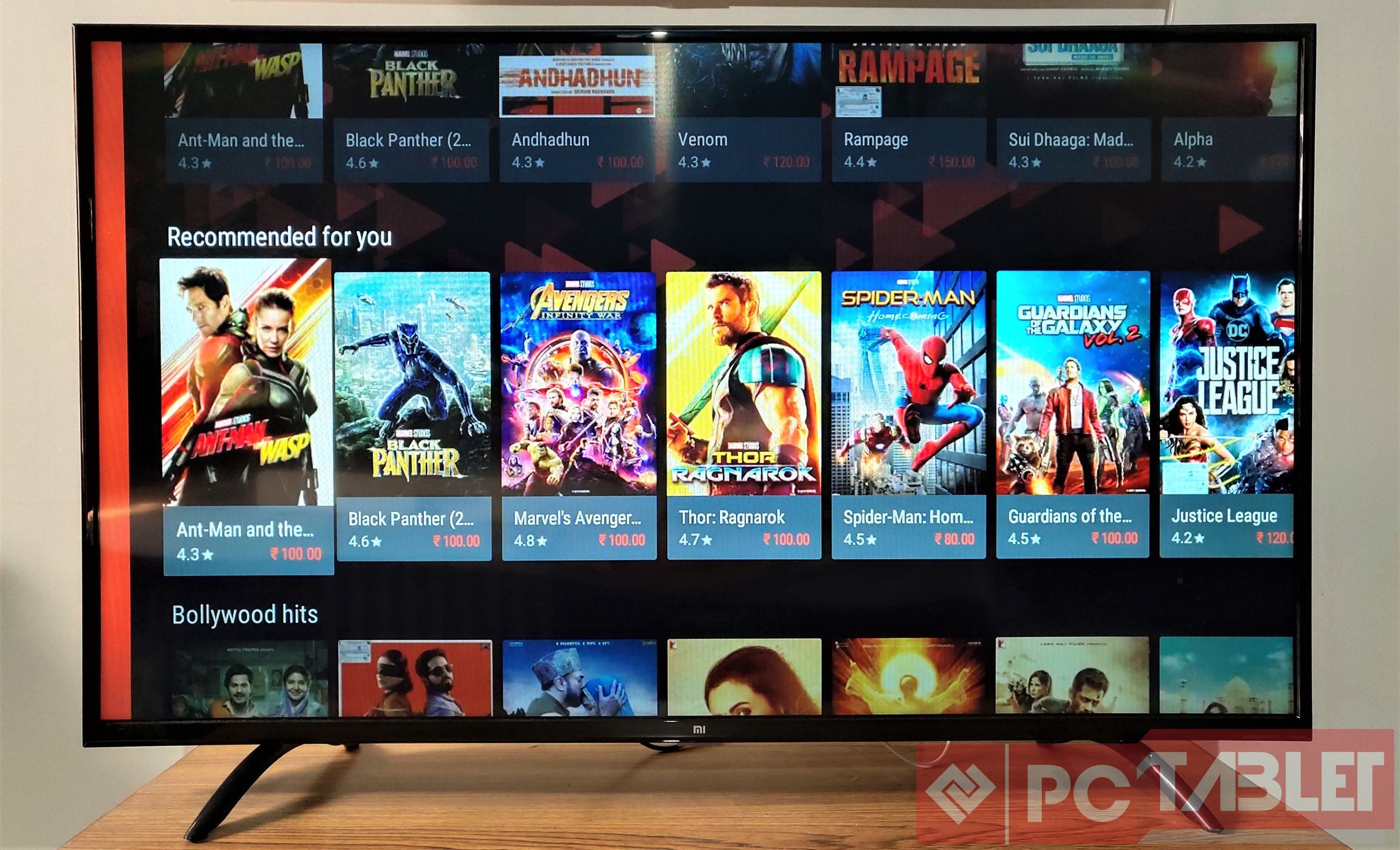 During our testing period, we didn’t really come across any lags on both the Android TV OS and Patchwall, everything was butter smooth even when switching between inputs. Even the Google Assistant worked well without any issues.

When it comes to audio, the TV comes with two 10W downward firing speakers, outputting a total of 20W. The speakers get sufficiently loud to fill up a big room very easily without any distortion even on high volumes. While there is no Dolby support, which you get on competition, there is support for DTS HD. With the speaker, the brand has done a decent job and if you’re one of those people who need extra punchier audio, then you can always invest in a Home Theatre unit or a soundbar, like the from Xiaomi themselves that we reviewed a while back.

Just Xiaomi’s smartphones, the MiTV lineup has always been known for their price to features proposition. While last years MiTV’s were selling like hotcakes, the entry of Android based MiTV’s will certainly disrupt the market once again. The 4A Pro 43 we tested has a lot going around in favor of it like Picture quality, the number of ports but the only things lacking here are the support for some streaming apps and improvement in the sound department.

The TV comes at a very aggressive INR 22,999 price point and gets a thumbs up from our side.

Get farm fresh produce at your doorstep with Fraazo