Meizu M3X and Pro 6 Plus with Android 6.0 Marshmallow leak online Do you want to know about the upcoming smartphones manufactured by Meizu? Geekbench is here to your rescue. The benchmark listing of Meizu M3X and Pro 6 Plus have been leaked on Geekbench. You can expect the launch of the handsets within the next few weeks time because the benchmark results have surfaced on the popular benchmarking portal.

If the Geekbench listing turns out to be true, Meizu M3X is expected to ship with a MediaTek MT6757 octa-core processor. During the test, the processor was clocked at 1.64GHz. The handset will be loaded with Android 6.0.1 Marshmallow. We wonder why Meizu is shipping out new handsets with Android 6 when Android 7 Nougat is already available. 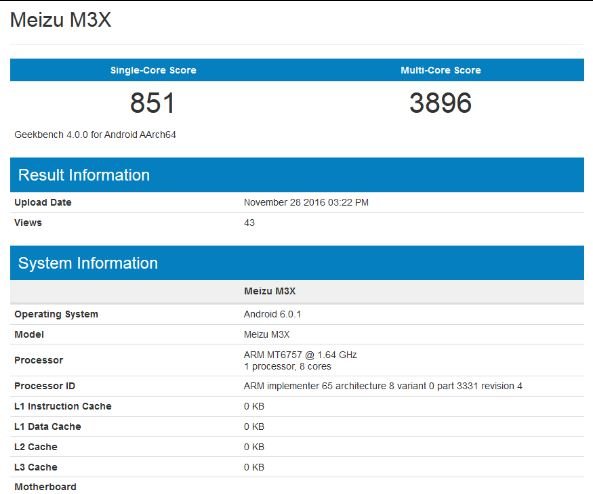 While the single-core score of Meizu M3X posted 851, the multi-core score scaled up to 3896. There are rumors that the phone will be integrated with 3GB RAM.

On the other hand, the Meizu Pro 6 Plus was listed as carrying an undisclosed processor. However, GizChina has reported that the processor could be Exynos 8890 without any valid confirmation. The Geekbench listing reveals that the processor is pegged at a clock speed of 1.48GHz. 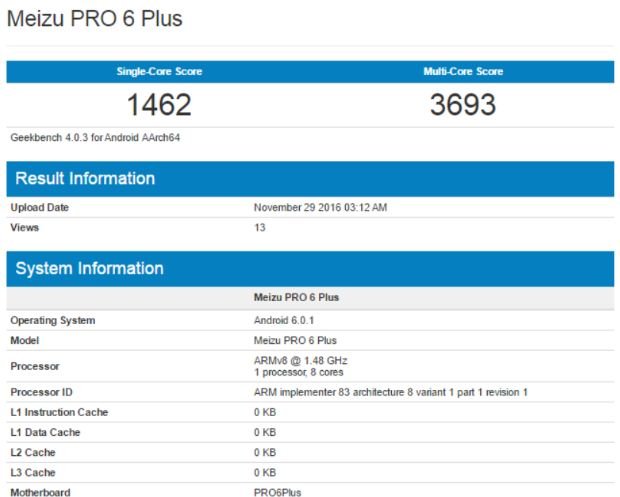 The handset will most likely offer 4GB RAM paired with Android 6.0.1 Marshmallow out of the box. You can expect the latest version of Flyme UI infused with the phone. While the single-core test scores a value of 1462, the phone gets a massive strength of 3693 when it was put to the multi-core test.

Meanwhile, the company is also gearing up to release Meizu X in the blue color variant. The handset will feature MediaTek Helio X20 processor with 10-cores, 6GB RAM and 128GB internal storage.