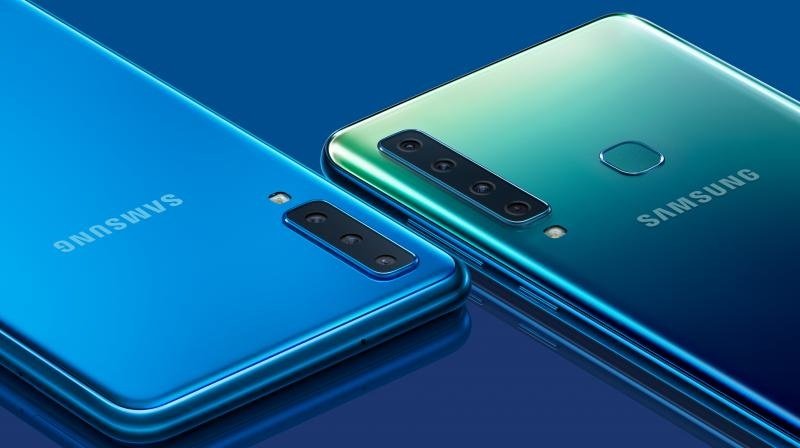 Samsung Galaxy A9 was launched at an event in Malaysia on Thursday. The highlight of the smartphone is its quad rear camera setup, the company’s response to Huawei’s P20 Pro which comes with a tripe rear camera setup.

The Galaxy A9 (2018) is Samsung’s attempt to give users DSLR-like image quality. The handset is equipped with a 24MP primary camera with f/1.7 aperture. Besides, there’s a 10MP f/2.4 sensor with support for 2x optical zoom, along with an ultra wide 120-degree 8MP f/2.4 lens, and a 5MP sensor with f/2.2 aperture to capture depth.

For selfies, the device is equipped with a 24MP front-facing shooter with f/2.0 aperture. The camera is also equipped with features such as Scene Optimizer, AI Scene Recognition to deliver professional quality photos, even in low-light conditions.

Elsewhere, the Galaxy A9 2018 sports a 6.3-inch Full HD+ Super AMOLED display with resolution of 1080×2220 pixels. The screen boasts an aspect ratio of 18:5:9. Under the hood, the smartphone gets powered by Qualcomm Snapdragon 660 octa-core processor bundled with either 6GB or 8GB of RAM.

As for storage, the Galaxy A9 2018 comes with 128GB of built-in storage which is further expandable up to 512GB via microSD card.

The handset gets fuelled by a 3800mAh battery with support for fast charging. In terms of OS, the device runs Android 8.0 Oreo out-of-the-box. It also features a rear-mounted fingerprint scanner as well as Face Unlock technology. Connectivity options on the handset include dual SIM (NANO) slots, 4G VoLTE, Wi-Fi, Bluetooth 5.0, USB Type-C, NFC, as well as a 3.5mm jack.

The Samsung Galaxy A9 (2018) gets a starting price tag of EUR 599 (roughly INR 51,300), while the handset will start shipping in November. It will be offered in Bubblegum Pink, Caviar Black, and Lemonade Blue colour variants. Samsung did not reveal the handset’s price for the Indian market at the event, nor did it mention anything about the smartphone’s availability in India. We’ll update you as soon as we learn about the Galaxy A9’s pricing and availability for the Indian market, Until then, keep checking back for more.