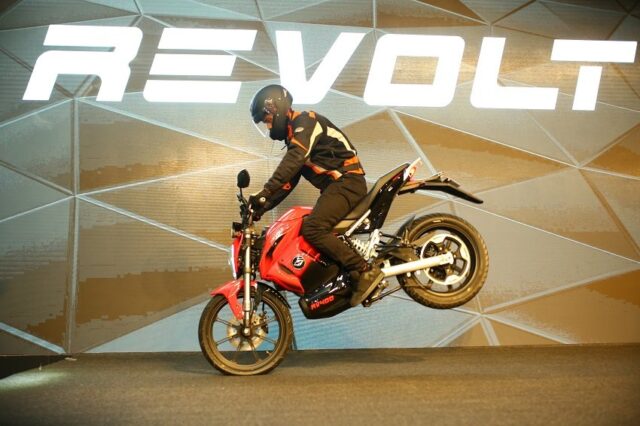 The Revolt RV400, the first AI-enabled, all electric motorcycle has been unveiled for the Indian market. Pre-bookings for the bike open on June 25, 2019 in New Delhi. It can be booked for INR 1,000 via RevoltMotors.com and Amazon. Bookings will then open for NCR, Pune, Bangalore, Hyderabad, Nagpur, Ahmedabad, and Chennai in the next four months. The RV 400 will hit Indian roads in July, and will be offered in a choice of Rebel Red and Cosmic Black color options.

The RV400 is India’s first AI-enabled bike which gets an ARAI certified range of 156km/charge. It can be plugged directly to a 15-ampere socket for a full charge in four hours. Besides, customers can also order a swappable battery via the Revolt App which is available on both iOS and Android.

The app offers several connectivity features such as Bike Locator, door-step battery delivery, mobile swap stations, anti-theft, sound selection and preview, along with many other utilities for two-wheeler riders. The app also informs users’ about statistics such as available range, total riding hours, as well as real-time diagnostics.

According to the company, the Revolt400 is a fusion of performance, design aethetics, and form factor. It boasts features such as anti-theft, geofencing, and geotagging.

The RV400 boasts front and rear disc brakes, however doesn’t come with ABS. Though, it features all conventional motorcycle parts such as a monoshock suspension and upside-down forks. The RV400 also gets an all digital instrument cluster.

“RV 400, is our first product from the Revolt Intellicorp stable comes with a promise to bring cool, smart mobility solutions that are high on performance and aesthetics. The product is not only a stunner but also challenges the general convention that all electric vehicles need to be silent or sound the same every day,” said Rahul Sharma, Founder & Chief Revolutionary Officer, Revolt Intellicorp Pvt. Ltd, in a press statement.