Home News What makes the Discovery of Distant Exoplanet By NASA so important? 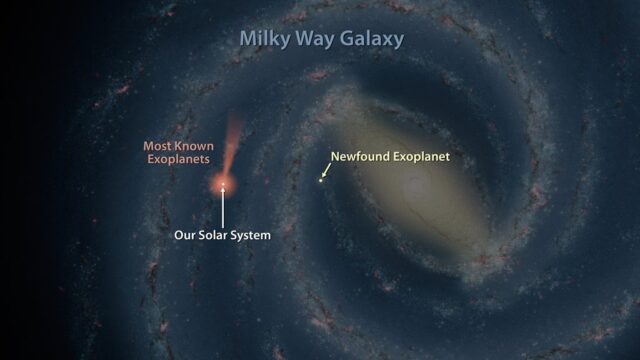 NASA’s astronomers recently made a discovery of an exoplanet placed around 13,000 light-years far from the earth, opening the possibilities of planetary mapping and discovery in the near future. This has enhanced the importance of the discovery of the exoplanet. During the project, the astronomers evolved a precise technique to locate the planets placed in faraway positions.

With this discovery, NASA is expectant that it will be able to understand the planet distribution in the Milky Way better. The exoplanet is made up of gases and is almost half of Jupiter in size. The project was carried out as a joint venture between Polish Optical Gravitational Lensing Experiment (OGLE) ground telescope, Las Campanas Observatory, Chile and Spitzer space telescope of NASA.

The Phenomenon of Microlensing

While working on this project, the astronomers made use of a particular phenomenon termed as microlensing. This phenomenon occurs when one of the stars passes from the front of the other star due to which the gravity of the closest star works like a magnifying glass. This bends the light of the distant star making it appear brighter than regular.

If a particular planet is orbiting this brighter star, it will interfere with the magnified light making it easier for the scientists to trace that particular exoplanet. Until now, astronomers have successfully used the phenomenon of microlensing for discovering 30 exoplanets.

What makes exoplanets so important that NASA and other space research laboratories are trying hard to discover newer exoplanets? Everyone wants to enjoy the pleasures of the earth. But scientists are visionaries who are aware that by the end of this century, the earth will not be able to fulfill all our needs.

This has made it important that we find other planets in the universe that have similar living conditions like earth. Although this is far-fetched, no one can rule out that, it can happen someday.