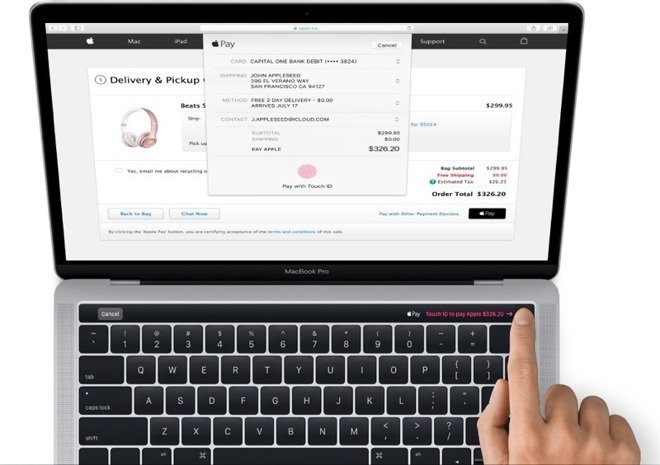 The images of the upcoming MacBook Pro have been revealed by a leading tech portal. According to multiple sources, the forthcoming MacBook Pro will ship with OLED magic toolbar and touch ID including a new speaker design.

We can clearly locate the speaker grills on the right side of the keyboard. Moreover, the dynamic touch-sensitive function row is also clearly seen on the leaked renders. Upon inspection, we can infer that the Touch ID fingerprint sensor will be located to the right of the rumored Magic Toolbar. It appears as a simple all-black button.

The first render shows a user placing his finger on the OLED touch display to authorize an Apple Pay purchase. On the left side of the bar, you can find a digital cancel button. In the currently available MacBook Pro, the slot was occupied by the escape key.

In the second image, the magic toolbar is not activated. We can spot a slight discoloration on the extreme right side. This signals the fact that the Touch ID sensor will not be a part of the OLED display. You can also view the redesigned speaker grills alongside the keyboard facing upward.

The integration of the new OLED touch bar in the forthcoming MacBook Pro will dynamically change its appearance based on user’s action. You will be able to view the virtual buttons based on the app or current task.

That being said, we will know all information on October 27. The launch event will take place in Cupertino, California at 10AM PST. Stay tuned with PC-Tablet.