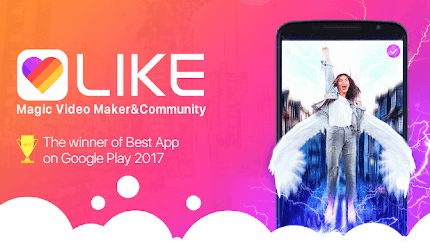 LIKE App has been making waves in the app ecosystem. We have been noticing the ranking on the Google play store and when we saw the LIKE App topping the charts, it was but obvious for us to know the craze behind this app. With more and more people indulging in social media video platforms for entertainment, the Like App- video creation and sharing app launched back in 2017 has gained a lot of attention, hitting the records of popularity with over 100 Million downloads in a short span of time.

BIGO LIVE has also won many awards in Best Entertainment App and Best Social App categories. With that being said, let’s get into our review of this new viral app to know if it is really worth the hype all around.

For starters, the LikeApp is a new video-based social network that allows you to create some amazing videos of yourself by using the inbuilt filters, stickers, animations and magical effects. Following the same, you can also mimic dialogues of famous actors, dub songs, mimic acting, etc. using lip sync and later can share it within the huge LikeApp community to gain traction.

This app is used by people around all over the world, including even some celebrities and Bollywood actors, followed by entertainment enthusiasts.

Firstly, install the app from the Google Play Store. You can also click here to download the LIKE App. On opening, the app will ask for your preferred language. Select accordingly, now you will be welcomed by tutorials followed by the login screen.

Further, if you want, you can create an account for yourself using E-mail ID and mobile number or else by simply connecting the app with Facebook/ Instagram / Google. Now that you’ve done that, you’re good to go!

The main screen of the app is your feed where you can watch popular videos from across the globe, shared by people i.e. the creators. By swiping left and right you can navigate through various sections including “Nearby videos” (filters videos depending upon distance), ongoing live video chats, and videos from people who you follow. In the bottom right corner, you have the search button using which you can search for any particular video or browse through popular hashtags.

The highly intuitive interface makes watching videos of your choice very uncomplicated. You can simply tap on any video to watch it and swipe up for the next video while watching one. The playback screen offers like, share, comment and save buttons, yes, you can download the videos as well. Moreover, you can also perform the duet with the video creator to show your creativity.

Using LIKEapp and creating videos on the same is quite easy. To start with, you need to tap the video icon located at the bottom of the screen. Now, the app will take you to the recording mode where you can switch between front and rear cameras. Further, you can tweak time, countdown between shoots, and can also make use of the given beauty mode. By default, you can select music (includes dialogues, songs etc) and start shooting.

You can adjust the speed of audio playback so that your lip movements sync properly with the selected audio clip. Moreover, there are tons of animations dubbed as 3D stickers which work on your actions, say, open mouth to sprinkle red roses, make a heart shape with two hands to rain blossom, blink eyes to get Oscars or add a funny mask to your face which will act on opening mouth etc, there are hundreds of such stickers and it will take a lot of time to explore each one of them. The best part is that each sticker offers some unique feature and works very well, thanks to the intelligent AI of the app. Do give their latest Diwali stickers a try, it’s quite festive and adds to the flavour of the festive season.

While using the app, we came across an ongoing campaign that LIKE is running. It’s a Diwali Campaign called #LIKE20Million with great giveaways. Watch out for a post from LIKE on your timeline. Make sure you have signed up to earn prizes.

With a recent update, we have received a new set of stickers named as Telekinesis which requires you to show the palm of your hand to control the movement of flowers raining down the screen, or rage thunder with the same. The way it interacts in real time makes your clip look more or less similar to a professionally edited video. Lastly, you can add music magic while recording videos to add a special effect to your videos which is in sync with that particular music; honestly speaking it is really engaging and a good way to kill your boredom. We tried every bit of these options, and after a couple of tries, we were able to create a shareable video on Like.

Now, what’s the magic here? Did we forget something? Well, it is the 4D Magic option- an AI-powered body movement tracker coupled with image editing and special effects processing that allows for interchangeable, dynamic backgrounds and can interact with multiple people in a video.

Basically, it requires you to keep phone the phone stable, say on a table, and click a picture of background (without you being in the camera frame) and then need to record a video with yourself in the frame, later on, you can post-process the recorded video and make yourself fly, jump, disappear like ghosts, take off with a jet throttle etc, you can also change the background and music. The final outcome seems to be very good and looks sort of magical, as the name suggests. There is also a Super Power mode as an icing on top of the cake, it allows you to add supernatural effects based on augmented reality that matches body movement, turning you into a full-fledged ghost.

Summing up, it is quite easy and indulging to create videos using the Like App. Once you go through the tutorial and instructions given in the app, you will be able to create some jaw-dropping content right from your smartphone.

The app is pretty small and runs very well even on low-end smartphones including the real-time animations and effects, there were no lags while switching through options. One thing which we liked about this app is that you can share the same video across multiple platforms at once, hence, saving your data as well as storage. You can surely give it a shot if you are looking for a video specific social media platform where you can create as well as share your own content.