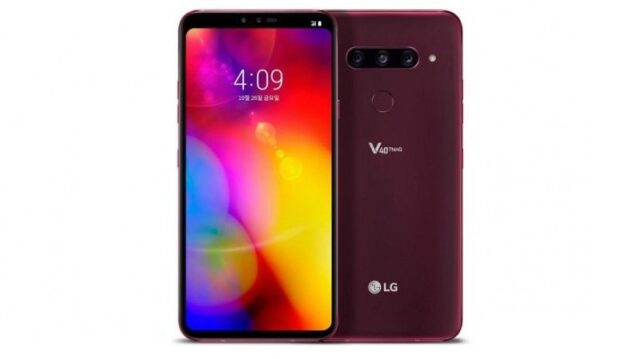 LG V40 ThinQ is finally here. The handset boasts a significant number of upgrades compared to last year’s LG V30. A few highlights of the handset include a triple rear camera setup, a 6.4-inch QHD OLED display with a notch, IP68 certification, and more.

In terms of specifications, the LG V40 ThinQ sports a 6.4-inch QHD OLED FullVision display having an aspect ratio of 19:5:9. The screen also gets Corning Gorilla Glass 5 protection. Under the hood, the handset gets powered by Snapdragon 845 processor bundled with 6GB of RAM and 128GB of built-in storage. The handset’s storage is further expandable upto 2TB via microSD card.

As for cameras, the LG V40 ThinQ features a triple rear camera setup. The main camera is a 12MP sensor with f/1.5 lens, and OIS. This implies that the handset will perform really well in low-light conditions. The second lens is a 16MP ultra wide sensor with f/1.9 aperture, 107-degree viewing angle, and 45 degree viewing angle. All three camera sensors also offer digital image stabilization for video recording as well as HDR recording.

In terms of OS, the device runs Android 8.1 Oreo worth the company’s custom launcher on top.

Juicing up the device will be a 3300mAh battery with support for fast wireless charging and QuickCharge 3.0 wired charging. Other notable features include IP68 water resistance along with Military-grade build (MIL-STD-810 certification). It also comes with a rear facing fingerprint scanner.

As far as pricing and availability goes, LG V40 ThinQ gets a starting price tag of $899.99 (roughly INR 66,400) in the US. However, the prices will vary depending on mobile carrier. The phone will be offered in Aurora Black, Moroccan Blue, Platinum, Gray, and Carmine Red colour options. It will go on sale in the US starting October 18. There’s no word yet about the handset’s India pricing and availability. We’ll update you as soon as we hear anything new. Until then, keep checking back for more.