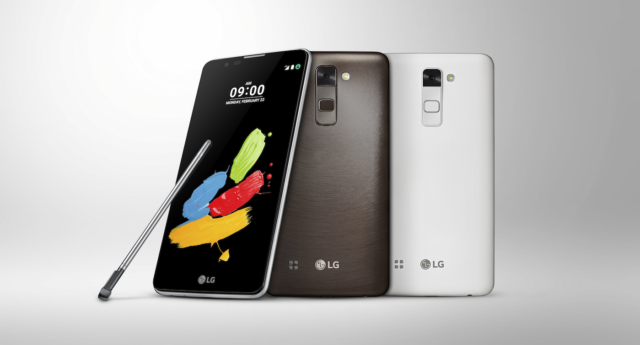 LG Stylus 2 with a 5.7-inch display and 3000mAh battery launched ahead of the upcoming Mobile World Congress 2016. Tipped to be showcased at the MWC event to be held in Barcelona, the South Korean company has not revealed the actual availability date though there are reports about its launch in the first week of March 2016.

When contacted, an official spokesperson of LG stated that the device will be “exceptionally priced” but declined to provide any pricing details.

Slated to be available in South Korea during the first week of March 2016, LG Stylus 2 will be available in more markets including Asia, Europe, and the US in a phased manner. While Stylus 2 smartphone features a nano-coated tip pen, it also has features such as Pen Pop, Pop Memo, Pop Scanner, and Pen Keeper.

While commenting on the launch, Juno Cho, president and CEO of LG Electronics Mobile Communications Company said that LG Stylus 2 offers not only big screen but also incorporates premium notetaking functions at a price of a mid-range smartphone. Moreover, the device denotes LG’s commitment to meet the requirements of the mass-tier segment where there is so much opportunity for growth and creativity.

Manufactured to offer more accuracy compared to the previous rubber-tipped stylus pen on the LG G4, the Pen Pop feature provides the capability to display a popup menu when the stylus is removed. Moreover, the pen keeper feature automatically notifies users when the stylus bay is empty. According to official sources, this feature is incorporated to prevent the stylus from being misplaced.

Equipped with a 5.7-inch In-Cell HD display, LG Stylus 2 is powered by a 1.2GHz quad-core processor coupled with 1.5GB LPDDR3 RAM and 16GB of inbuilt storage (expandable up to 32GB via microSD). It sports a 13-megapixel primary camera in addition to an 8-megapixel front camera.