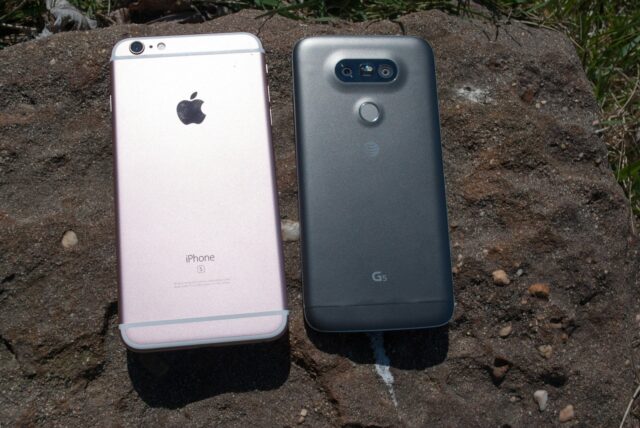 Two big screen phones, the LG G5 and the Apple iPhone 6S Plus, both sleek in design, offering specifications that are toward the higher end of the spectrum. In fact, a close look and you will notice that the new LG G5, in fact, has some better offerings than even Apple’s much-coveted phablet, the iPhone 6S Plus.

The LG G5 is smaller than the iPhone 6S Plus and measures 149.4 mm in length, 73.9 mm in breadth and 7.7 mm in thickness. Lighter than the iPhone 6S Plus, it weighs 159 grams and sports a 5.3” touchscreen. The phone runs on a Qualcomm Snapdragon 820 chip two dual-core Kyro processors that provide speeds of 2.15GHz and 1.6GHz and is supported by an Adreno 530 GPU.

The LG G5 also supports external modules/accessories which bring an improved experience to photography (LG Cam Plus), possibility of recording of 360-degree videos (LG 360-Degree Cam), a chance to keep a remote eye on your home (LG Rolling Bot).

The LG G5 is available for a price of $624 for 32GB variant and allows you to expand its memory externally up to 2TB (200 GB) with the use of a micro-SD card. The phone is available in the colors of Titan, Silver, and Gold.