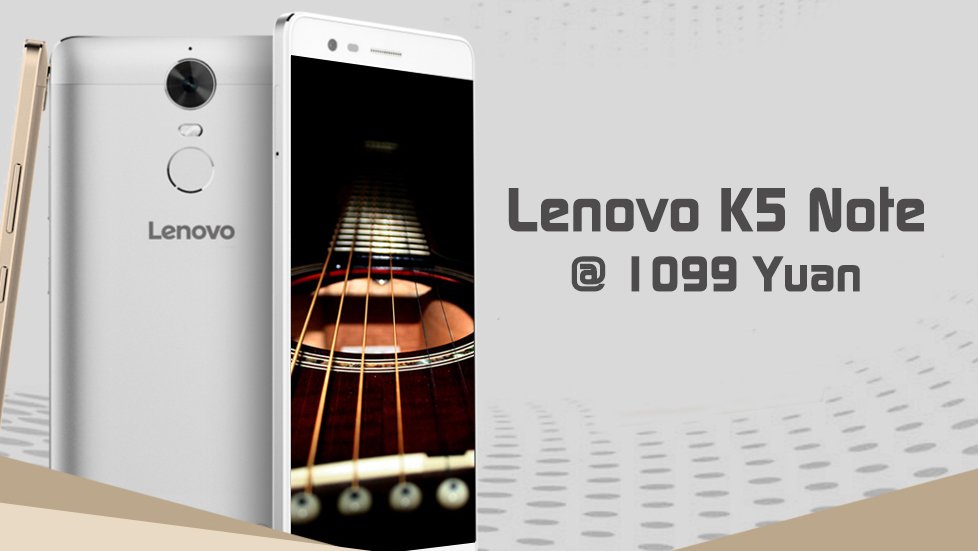 Lenovo K5 Note has been launched in China with a 5.5-inch display and front-facing dual stereo speakers in Gold and Silver color variants at 1099 Yuan. The device will be available in China via a flash sale, for which the registrations have already started.

Equipped with Helio P10 1.8GHz octa-core processor and paired with Mali-T860 GPU, the Lenovo K5 Note flaunts a 5.5-inch LTPS IPS Full HD (1920 x 1080) display, 2GB RAM and 16GB storage with the capability for expansion up to 128GB. If you compare the specifications with the recently released K4 Note, Lenovo has reduced the amount of RAM in K5 Note.

Powered by a 3,500mAh battery, the device is capable of delivering a talk time of up to 34.2 hours and a standby time of 544 hours, the K5 Note also includes support for fast charging with he provided 5V/2A adapter.

Featured with three microphones for noise cancelling purpose, the dual-SIM K5 Note also includes a fingerprint sensor to complete transactions and various activities in a secured way including support for Android Pay.

On the other hand, the Dolby Atmos Surround System delivers premium sound with the help of 1.5W speaker on the rear.

Similar to Lenovo K4 Note, the new K5 also runs on Android 5.1 Lollipop with Vibe UI, which is normally found in all the smartphones manufactured by Lenovo.

According to reports coming in, the Lenovo K5 Note is expected to get an update for Android 6.0 Marshmallow by the end of Q1 2016.

Interestingly, Lenovo has launched K4 Note in India recently after its official launch in China. It remains to be seen when Lenovo brings K5 Note in India. As of this writing, we don’t have information about the availability of Lenovo K5 Note outside China.