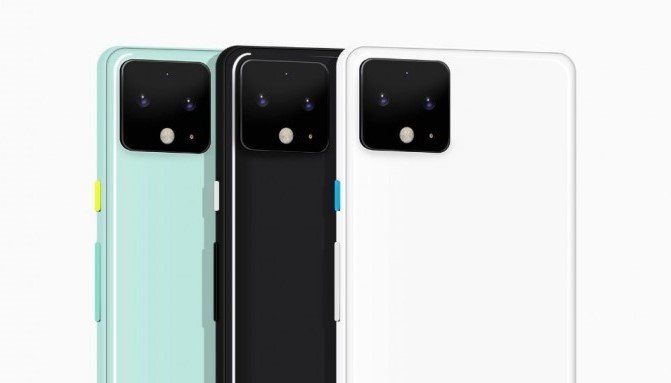 After following tons of Pixel 4 leaks this year again, Google itself came up with a nod, affirming the upcoming flagship’s design. That said, now, a set of Pixel 4 and 4 XL renders have appeared online, showcasing a new Mint Green colour option, alongside the traditional white and black.

According to the renders, the Mint Green colour of the Pixel 4 sports a yellow power key whereas the White version gets a blue coloured power button. On the other hand, the power key on the Black version comes painted in white.

However, one of the images has the camera placed incorrectly in the module. And thus, it’s likely to be a fan-made leak or an iteration based on the already confirmed design.

Besides, a separate leak by tipster Sudhanshu Ambhore showcases case renders & images of clear cases for Google’s upcoming flagship duo. The device flaunted in this leak is painted in Blue colour.

As you’d have already noticed, the new renders reveal dual cameras on the Pixel 4 and Pixel 4 XL. Whereas, the image shared by Google hinted at triple cameras with one of them tipped to be a wide-angle sensor.

However, on carefully inspecting the leaked live image, it seems a microphone actually occupies the spot. The same is also evident in these renders. Nonetheless, the secondary microphone is likely to be used for noise cancellation while recording videos and taking calls.

Whereas, the larger Pixel 4 XL is speculated to sport a larger 6.2-inch or 6.4-inch display with 160.4 x 75.2 x 8.2mm as its measurements. Out of the two cameras, one is expected to be a wide-angle sensor. The upcoming duo is also said to feature an upgraded “Spectral + flicker sensor”, followed by a dual-LED flash and laser autofocus.

Moreover, the devices will be powered by top-of-the-line Qualcomm Snapdragon 855 SoC, paired with 6/8GB of RAM. If previous reports are to be believed, we might also see a better dual Sim support, followed by in-display fingerprint scanners in the next generation Pixels.