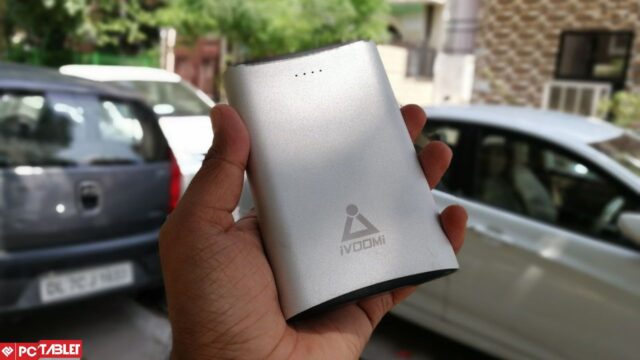 iVOOMi released a high capacity power bank for smartphones and other smart devices. The power bank has a capacity of 13,000 mAh which is enough for charging three to four devices quickly with a full charge. The build and design of the power bank is also very straightforward; it comes with two ports and aluminum body to withstand rough usage. The power bank retails for Rs. 1,399, let’s find out more about this power bank in its in-depth review.

iVOOMi power bank comes with a nice aluminum casing all over with matte silver finish. The end caps are made of black plastic and feel sturdy too. It has the iVOOMi logo on the front with status indicator LEDs and some details about the power bank at the back. The iVOOMi power bank has rounded edges all over to hold it comfortably in hands and keeping it in the backpack easily.

The top edge of the power bank has all the ports and a button to check the status of the battery. It also got two USB ports for charging two devices simultaneously and a microUSB port to charge the power bank.

The iVOOMi power bank is a compact device but not small enough to keep it in your pocket. Because of its high 13000 mAh capacity, it can charge three devices quickly from 0% to 100% with average 3000 mAh battery capacity each. It comes with two output ports and is intelligent enough to adjust the power according to the device attached.

Check out ivoomi me 5 smartphone review

The maximum output is 5V/ 2.1A for fast charging for every smartphone; both output ports can charge two smartphones simultaneously with same charge rate. There is no need to turn the power bank on for charging; it automatically turns on when any device is attached to the output and start charging it. And once the device is detached, it turns off automatically to save the battery.