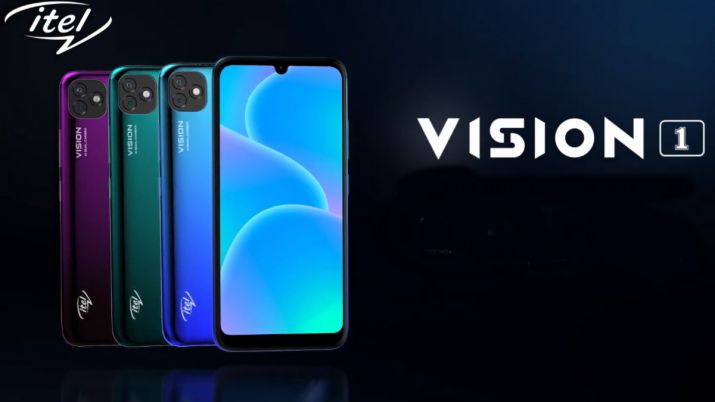 Itel– a brand owned by Transsion Holdings, has now unveiled its new entry-level smartphone in India, dubbed as Itel Vision 1. The phone offers a water-drop notch, dual rear cameras, and a 4,000mAh battery for a price of Rs. 5,499. Besides, the company has also included a bunch of launch offers to attract buyers. Let’s have a look at the detailed specifications of the device.

Under the hood, the device gets powered by an octa-core Unisoc SC9863A processor that bears a clock speed of 1.6GHz and is built on a 28nm HPC+ process. The chip is coupled with IMG8322 GPU, 2GB of RAM and 32GB of onboard storage. The latter can be expanded further up to 128GB via a microSD card.

For photography, Vision 1 gets an AI-powered dual-camera setup at the rear. Wherein you get an 8-megapixel primary rear camera paired with an LED flash and a 0.08-megapixel depth sensor. The module itself seems to be inspired from the iPhone 11. For selfies, there’s a 5-megapixel front camera with 1.4-micron pixels.

The phone runs Android 9 Pie and packs a 4,000mAh battery. The same is said to offer 820 hours standby, 24 hours of average usage, 45 hours of playing music, 8 hours of playing video and 7 hours of gaming. Besides, the device gets a fingerprint scanner, followed by the Face Unlock feature. Connectivity features like dual 4G VoLTE and VoWiFi are given onboard.

The Itel Vision 1 has been priced at Rs. 5,499 in India for the lone model with 2GB RAM and 32GB storage. The phone comes in Gradation Blue and Gradation Purple colour options and will be sold through authorised retail channels across the country.

Plus, the company has also announced a bunch of launch offers with the device. This includes a free Bluetooth headset worth Rs. 799 in the box, accompanied by a cashback worth Rs. 2,200 and 25GB of additional 4G data for Jio subscribers.

Realme Black Friday sale, here are all the details