According to digital security firm Zscaler, iOS apps are also responsible for leaking additional data. In fact, the research revealed that iOS apps leak more user data than Android apps. It was said by analysts in the past that Android platform is prone to hacking and leaking personal information without knowledge from users. 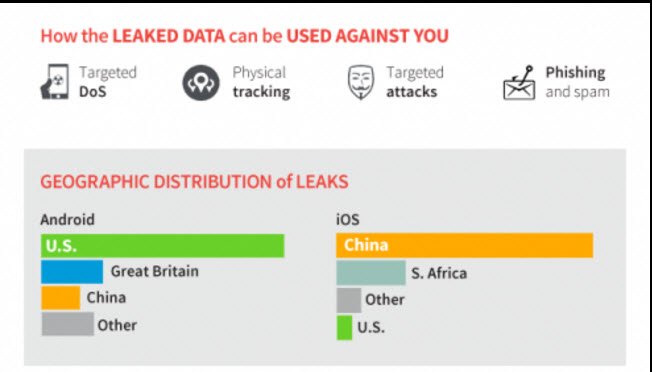 Even though the numbers are too big, it was found that handset information and location data are mostly shared. According to Zscaler, only a mini segment of the leaked data was found to contain personally identifiable info (PII). While 0.2 percent of the leaked originated from iOS included PII data; it was 3 percent in Android.

It was also found that nearly 70 percent of iOS privacy-related traffic originates from China. However, in the case of Android, they came from the US and the UK.

We have given few images to enable you to decipher the results gathered from the survey. That being said, both iOS and Android are vulnerable to attacks. You have to take proper precaution by keeping your gadget clean with various mobile based antivirus solutions.