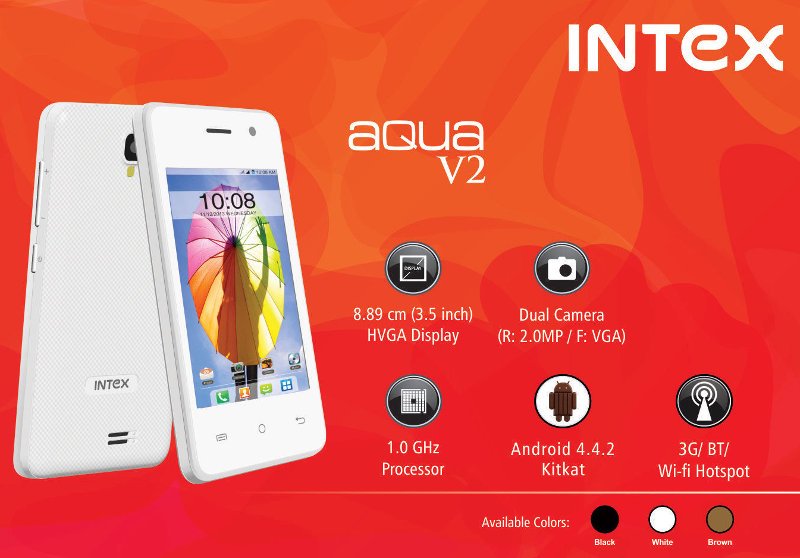 Intex has announced yet another smartphone for budget customers in India. Called Intex Aqua V2, a new smartphone supports 3G network, runs on Android 4.4.2 KitKat, and will retail for just Rs. 3090.

The low-cost smartphone does not have any surprises under the hood, however. It’s a basic 3.5-inch smartphone with HVGA resolution display, powered by Spreadtrum (SC7715) 1 GHz single core display with 256 MB RAM.

Intex Aqua V2 has only 104 MB of user available memory, which means the performance may not be as smooth as you’d like to. It does have a microSD card slot allowing you to increase the storage capacity up to 32 GB.

Although it’s a basic Android phone, Intex didn’t forget the selfie-craze as it included dual camera on this phone. Its front camera is 0.3 megapixel, but the rear camera is a 2 MP shooter with fixed focus and LED flash.

It has WiFi, Bluetooth v4.0, micro-USB, 3G, GPS, and a battery with 1300 mAh capacity. Intex says that the customers can expect up to 6-8 hours of talk time and 180 hours of standby time with that battery.

Although some budget smartphones do not have a lot of sensors, Intex didn’t forget to include some of the most anticipated and useful sensors such as Accelerometer, Proximity, and ambient light sensor.

Users will have access to built-in apps including Intex Zone, Opera mini, Intex Play, OLX, Intex care, and Flipkart among others.

Intex Aqua V2 may not excite consumers with its specifications, but its neat design and attractive price point with 3G connectivity and dual SIM support may make a lot of budget consumers interested in the phone.