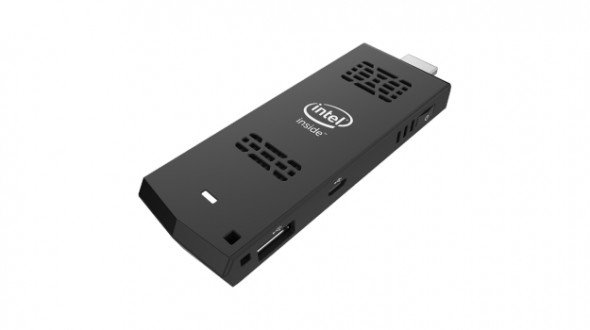 Intel has launched a Compute Stick to cater to the new “PC in Pocket” series of devices. Intel’s Compute Stick is second such release of small computing devices, post release of Google Chromebit. Intel has started Pre-Order of the Compute Stick device through Online Stores. As of now the delivery date of the device is expected to 24th April and the device is showing out of stock on NewEgg.

The Intel Compute Stick sports a quad-core Intel Atom processor with 2GB of RAM and will have two variants of internal storage at 32GB and 64 GB. Intel Compute Stick also has a USB port to expand memory by plugging in an external Hard Disk Drive. The Stick is Wi-Fi ready and supports 802.11bgn protocol so as to access internet over a Wi-Fi connection.

The Stick also supports Bluetooth 4.0. The Stick has HDMI connectivity and it can be attached to any HDMI screen to run it like a PC. The Stick is handy with dimensions of just 110.9mm x 38mm x 9.8mm.

Intel has released 2 variants of the Stick, one running on Ubuntu Linux which will cost $ 110 and a Windows 8.1 variant which will cost $150. This device was unveiled by Intel in the Consumer Electronics Show in January.

Intel’s hardware on the Stick is comparable to the Google Chromebit device on paper. Google’s Chromebit is better designed with round edges and shine finish. Intel’s stick is a full fledge PC running a full variant of OS which can run lots of apps from Windows App Store, some games and you can surf the web using the browser.

This Compute Sticks are full fledging PC but they didn’t compete with a regular Laptop or PC. These devices would be great for a hobby PC or a second inexpensive PC or for some work on the go PC. If we put in cost of a HDMI screen, Keyboard, Mouse and basic speakers these Pocket PCs would be as expensive as entry level PC.