The Transsion Holdings brand Infinix on Tuesday unveiled a new smartphone in India, dubbed as Infinix S5. For starters, the new mid-ranger touts a punch-hole display, a quad-camera setup at the rear, and a 32-megapixel selfie camera. Let’s have a detailed look at its specifications and features.

Under the hood, the device gets powered by octa-core MediaTek Helio P22 SoC- the same processor found on Infinix Hot 8, coupled with 4GB of RAM and 64GB of inbuilt storage. That said, the storage is further expandable up to 256GB through the dedicated slot for microSD card.

For photography, the phone gets a total of four cameras at the rear. This comprises of a 16-megapixel primary sensor with an f/1.8 aperture, a 2-megapixel Super Macro lens capable of shooting objects as close as 2.5cm, followed by a 5-megapixel wide-angle lens with a 114-degree field of view, and a 2-megapixel depth sensor. Besides, it also gets a quad-LED flash and Google Lens feature. For selfies, there’s a 32-megapixel camera with f/2.0 aperture, 4-in-1 pixel binning and an AI-powered 3D Face Beauty mode. 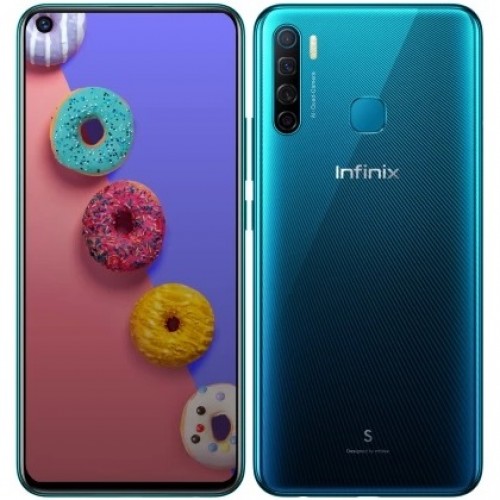 Just like other Infinix phones, the Infinix S5 runs XOS 5.5 Cheetah based on Android 9.0 Pie. Powering the phone is a massive 4,000mAh battery which is claimed to deliver up to 18.8 hours of talk time on 4G and 32 hours of music playback.

Amongst other features, the phone gets a rear-mounted fingerprint scanner, and fast Face Unlock claimed to unlock the phone within 0.3 seconds. All the basic connectivity options, including dual-4G, WiFi, Bluetooth and GPS, are given onboard.

Commenting on the launch, Mr Anish Kapoor, CEO Infinix India said, “I would like to acknowledge our users for continuing to show great trust upon the brand and welcoming each new Infinix device with an overwhelming response. Infinix’s promise of being a First-in-Segment-Technology brand that democratises the best of smartphone tech for the masses is lived with every new device of ours, and S5 is no exception. At a time when content viewing has become the favourite past-time of smartphone users, S5’s unmatched viewing experience promises to set itself apart from the crowd. The confidence instilled by our users has propelled the brand Infinix to make new breakthroughs and keep on introducing innovations to smartphone audiences all over the country!”

The Infinix S5 has been priced at Rs. 8,999 for the sole model with 4GB of RAM and 64GB of internal storage. The device will be available in Quetzal Crystal and Violet colour variants through Flipkart with sales starting from 12 pm IST on October 21.