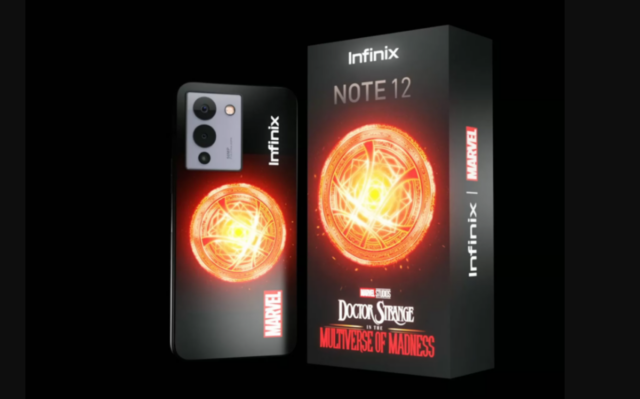 Infinix announced it is all set to launch its new Note 12 series smartphone in India on May 20. The upcoming Note 12 series is also going to be unique in that it will include a special edition Doctor Strange in the Multiverse of Madness version. The Hong Kong based smartphone manufacturer said they have partnered with Marvel Studios for the same and will include suitable branding along with other markings to indicate its specialty that makes it stand out from the rest.

That includes a black rear panel done up in matte finish. The “Spell circle” is bang in the center and has a realistic feel to it what with the glowing red edges, all of which stand out all the more thanks to the black rear. The Marvel branding is included on the bottom right edge and the company’s branding is inscribed at the right top end. The camera module is done up in a contrasting shade of pale white that houses the three camera sensors and the LED flash.

Coming to specs, the Note 12 series will come with a 6.7-inch AMOLED display having FHD+ resolution. The display comes with widevine L1 support as well which means it can stream content from streaming apps such as Prime Video, Netflix, and such at the highest possible resolution.

The Note 12 series comprising of the Note 12 and Note 12 Turbo will feature a triple rear camera system. It runs the Android 12 OS and is supported by 33W fast charging tech. The phone is going to be available in India exclusively via Flipkart.

The Doctor Strange in the Multiverse of Madness happens to be the latest movie from the Marvel franchise and is currently being screened in theatres across the country. Clearly, the launch of the phone is timed to make the most of the popularity of the movie among fans of the Marvel comics as well as gen-X users in general.