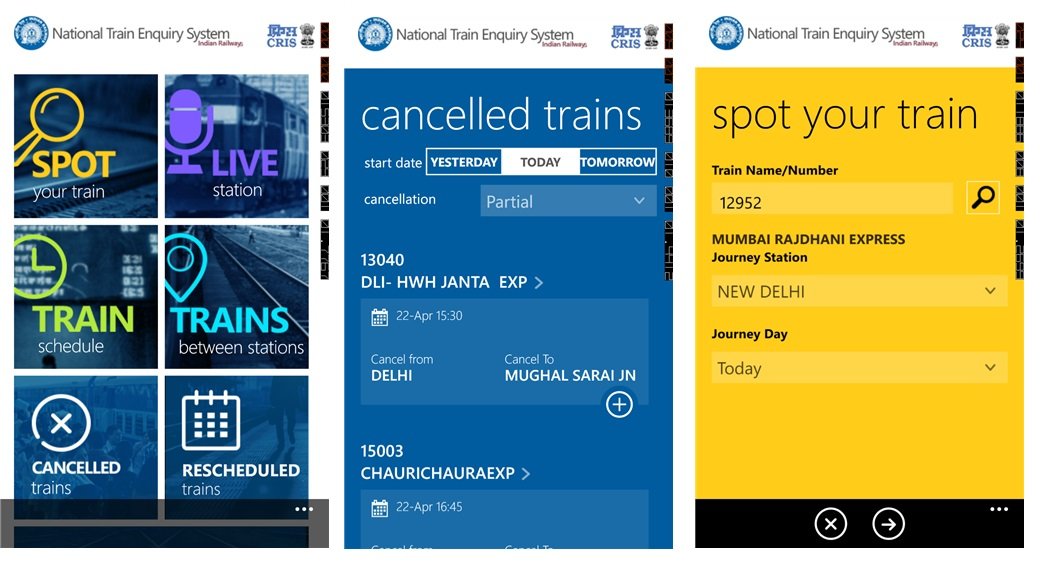 What’s so special about Indian Railways? It readily serves the poor and middle class population despite people complaining it moving at a snail’s place. Moreover, a handful of stations on Indian Railways are famous for the regional specialty food items available there. So, it is the first itinerary option that comes to the minds of millions of people.

National Train Enquiry System is all set to provide you the live information on your Windows phone.

To make the itinerary option more feasible, Indian railways has just launched an app for Windows 8 mobile users called NationalTrain Enquiry System (NTES). The app rolled out by railway division – Centre for Railway Information Systems (CRIS). This app, to certain extent will make life of travellers a bit easier that are harassed by unpredictable train schedules and unwanted delays.

NTES is railways’ back-end system which provides information to the public about train schedules on a near real time basis through various interfaces like nationwide unique rail enquiry number 139, website, mobile interfaces, touch screens, enquiry counters and display boards at stations. The app roll out adds another extra to its system.

Reports suggest, NTES app will not just be limited to handsets running n only Windows 8 operating system. It will be available for other platforms like iOS and Android too. In addition to this app, there are other apps in the pipeline too.

The app under “Trains between Stations” option, one can find out the list of all types of trains available between any two stations on railway network. It also comes with “Cancelled Trains” option which displays all trains marked as cancelled, reported a railway official.