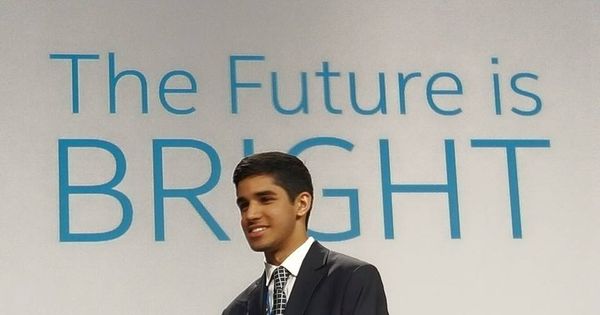 PITTSBURG: Karan Jerath, an 18-year-old Indian-American boy has won the prestigious Intel Foundation Young Scientist Award in the US for inventing a device that can quickly shut down undersea oil spills.

Karan was one of the five students who were selected for the Intel and Indo-US Science and Technology Forum Visit to India Award.

Karan Jerath of Friendswood,Texas received the top prize of USD 50,000 on Friday at this year’s Intel International Science and Engineering fair (IISEF).

Jerath won the prize for designing a sturdy device that can collect the oil, gas and water spewing from a broken well on the seafloor.

According to Jerath, “sensors inside the 350-ton device would measure the temperature, pressure and density of the mixture of gases and fluids erupting from a well.”

“A computer would then calculate how valves in the gadget should be adjusted so that the gas and oil can be collected.

That should stop a spill in its tracks. The device could help prevent an ecological catastrophe. It also would reduce cleanup costs,” Jerath said.

He was among the other two teen researchers who shared the top position. One developed a technique to more quickly diagnose infections by HIV and the other one used sophisticated software to improve the flow of air inside aircraft cabins that could reduce the transmission of disease among passengers.

Not only Jerath., many other Indian-American students also won awards in various categories, five of them getting the first award in their specializations, biochemistry, behavioral sciences, environmental engineering, mathematics and energy physics
Maya Ajmera, who heads the Society for Science and the Public that conducts the IISEF, congratulated the winners and said, “These talented young students are the problem solvers and innovators of their generation.”

The main purpose of the Intel International Science and Engineering fair Awards is to bring out the students’ abilities to tackle challenging scientific questions, use authentic research practices, and create solutions for the problems of tomorrow.