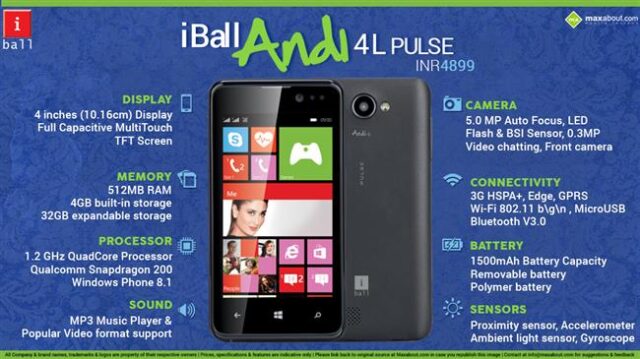 A new Windows 8.1 phone from iBall was launched in India on Thursday that will cater to customers looking for a budget phone and don’t mind venturing into the Windows arena. According to sources, the company listed the phone on its website a while ago, but has recently started selling the device in to customers.

Priced at Rs. 4,999, the new iBall Andi 4L Pulse Windows phone comes with a 4-inch TFT display that has a resolution of 480×800 pixels. It runs on the latest version of Windows Phone operating system straight out of the box and features dual SIM card slots.

On the hardware end, this budget Windows phone has a 1.2GHz quad-core Qualcomm Snapdragon 200 SoC and 1 GB of RAM for smoother performance. Although the internal storage is 4 GB only, it can be expanded with a microSD memory card. The phone supports up to 64 GB of microSD memory card, so there should be plenty of space if the user inserts an external card.

For the camera geeks, the phone has a rear 5-MP camera that can autofocus and has an LED flash. The camera does have a front camera for selfies, but the resolution of that camera wasn’t clearly stated on the company website.

iBall Andi 4L Pulse supports 3G network, so customers will not be left out of the growing 3G network in India just because it’s a budget smartphone. It also has Bluetooth 3.0, micro-USB port, GPRS-EDGE network support, and a 1500 mAh battery.

Because the iBall Andi 4L Pulse runs on Microsoft’s Windows Phone operating system, users will get to enjoy a few extra benefits such as Office Suite, OneDrive, Xbox, Bing, etc that will be pre-installed on the device.

For the price, iBall Andi 4L Pulse is the cheapest Windows phone device available in India right now that doesn’t sacrifice the performance or specification to cut the price. So customers looking to try something other than Android phones may want to give this phone a serious thought.