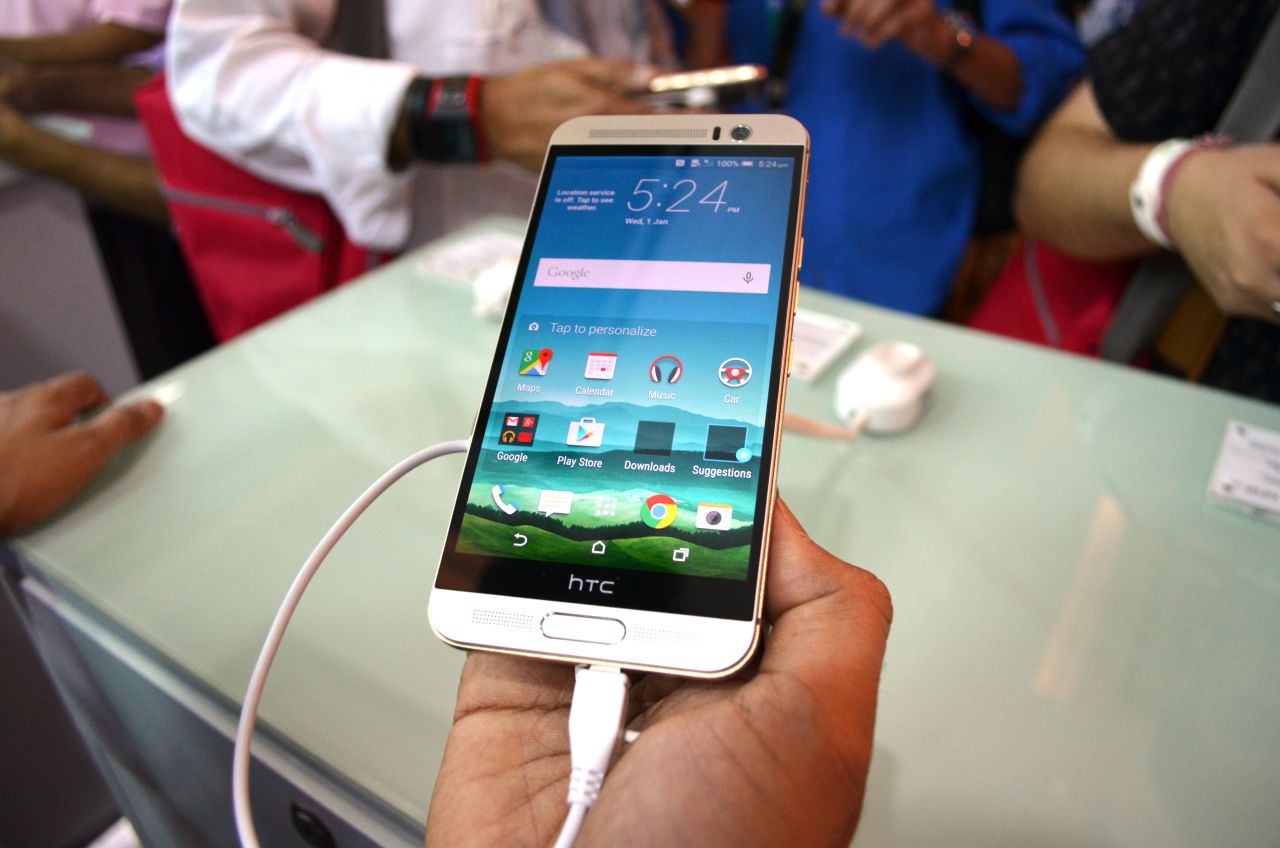 HTC One M9+ holds a 2K Quad HD display instead of a Full HD 1080p display that comes in HTC One M9, released earlier by the company basically for the western countries.

HTC M9 looks inspired from its predecessor One M8 as it also features similar aluminum finish curve body and great design which has become synonymous with HTC One series.  HTC One M9 device has been anodized twice to achieve the premium finish look it possesses, it takes over 300 minutes of time to achieve such quality.

“We are thrilled to bring the luxuriously designed HTC One M9+ to our customers in India.” said Faisal Siddiqui, President, HTC South Asia and India. “The new HTC One M9+ delivers a combination of amazing imaging with the new and improved iconic Duo Camera that we pioneered; a new 2K display for viewing brilliance; exhilarating sound with HTC BoomSound with Dolby Audio; and our latest Fingerprint sensor, giving our customers a peace of mind and a truly HTC One experience.”

HTC One M9 features a MediaTek helio X10 64bit 2.2 GHz octa-core processor backed up by 3GB of DDR4 RAM. It comes with 32GB internal storage and an expandable slot to plug in a MicroSD card of up to 2TB capacity. HTC One M9+ features a 5.2-inch 2K WQHD super LCD3 display with screen resolution of 1440×2560 pixels. The phone runs Android 5.0 Lollipop with HTC Sense 7.0.

HTC always scored big in the design department with One M9+ taking the same road with excellent design and finish. HTC has released the phone in dual-tone colors, with the back in silver color and the edges in Gold. The back panel has a new hairline brush finish with a scratch-resistant coating to keep it shiny.

The new coating also make the device non-slippery which was one of the most notorious feature of M8. HTC One M9+ will be available in Gold on Silver and Gold on Gold color variants.

HTC One M9+ features BoomSound speakers with Dolby Audio placed towards the front at its top and bottom. HTC One has the richest sound in the smartphone category. The Dolby technology has provided the phone a richer and more deeper sound. True left and right channel audio is delivered by the phone making a remarkable 5.1 surround sound experience.

HTC has placed the power button on the side with the volume button placed just one inch above. This is a bit clumsy as the fingers accidently touch on volume when turning the phone off.

HTC One M9+ features a 20 MP sensor with a sapphire cover lens with f/2.2 and 27.8 mm lens which can shoot 4K videos. HTC has packed some serious apps such as HTC Eye Experience Software which allows you to create a Split Captures, take Voice Selfies, and apply Live Makeups and more.

It features a 4 Mp camera at the front with UltraPixel technology. With the Selfie craze HTC front camera delivered enhanced selfies. As the phone has  a wider angle of view it will help a user to include more people in a groupie.

Though HTC has upgraded the camera and the firmware since M8 to offer better camera experience the camera still lags to the like of iPhone 6 and Samsung Galaxy S6 in terms of image quality and stability. The low light photo quality is extremely poor for a feature rich smartphone.

If you are work the work related apps such as office, mails, etc will be displayed on the widget. Once you reach home other apps such as Youtube, Facebook, etc will take over.

HTC One M9+ has a 2840 mAH battery which has more capacity than M8. Though HTC claims that the phone would be able to survive a single day without charging, the actual battery performance is not that great.

HTC One M9+ is a nicely designed smartphone which appeals to a user because of its metal finish. Though HTC has keep the look and feel of the phone same the users upgrading from One M8 to One M9+ will find significant difference in terms of camera and image quality. But the size and the battery life really pulls down the phone in terms of key features.

The HTC One M9+ comes with 3GB RAM and 32GB on-board storage version and expandable memory up to 2TB via microSD storage. HTC One M9+ will be available in Gold on Silver and Gold on Gold with all major retailers from early May.