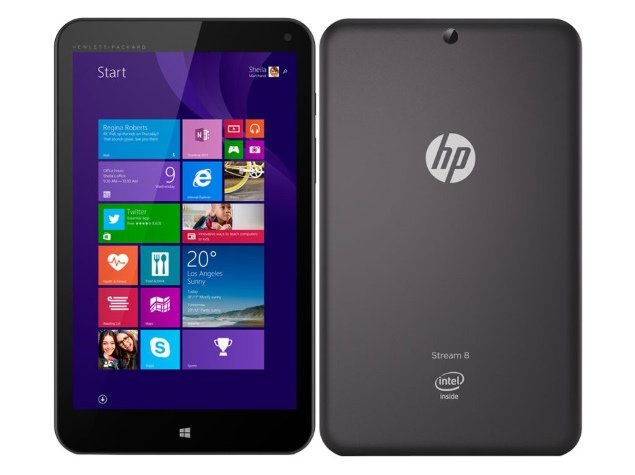 HP has just released its new tablet called HP Stream 8 in India that runs on Windows 8.1. The new tablet, which runs on an Intel processor, is now available from a variety of e-commerce stores including Flipkart for a retail price of Rs. 16,990.

As the name suggests, HP Stream 8 features an 8-inch capacitive touch screen that has a native resolution of 1280 x 800 pixels. The tablet has Intel Atom Bay Trail quad-core processor under the hood that is clocked at 1.8 GHz.

It packs 1 GB RAM and an impressive 32 GB of ROM (internal storage). The device also has a microSD card memory slot which can be used to expand the device’s storage capacity up to 32 GB.

HP’s new tablet in India has a 5 MP shooter on the back. For all your selfies and video calling through apps like Skype or Viber, it has a 2 MP camera on the front.

It has a SIM card slot, so you can connect to your operator’s 3G network if WiFi isn’t available. With 4000 mAh battery, the tablet is only 8.9mm thick.

HP Stream 8 has other tidbits that tablet devices today have to offer. Bluetooth v4.0, USB 2.0, GPS, G-Sensor, Accelerometer, built-in microphone and speaker, etc. all are there.

The one thing that makes it different than most other tablets in the market today is its operating system. While the market is flooded with Android-powered tablets, a device with Windows 8.1 can bring you a different experience.

Windows tablets are by no means inferior, but the lack of apps. When compared to Android’s huge array of apps, it is the one thing that makes consumers think twice before picking up a Windows tablet.

However, if you aren’t that app-savvy, and you need a tablet for basic browsing, PDF reading and email, you can’t go wrong with HP Stream 8 which runs on Windows 8.1.