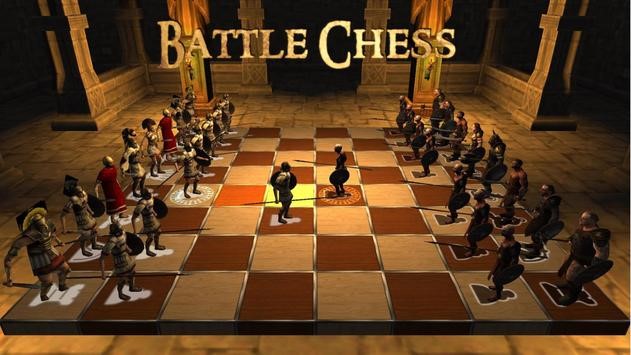 Looking for a good strategy game? Well, chess is definitely a classic and a timeless choice when it comes to that particular genre in the world of games. Experience a brilliant amalgamation of the classic old chess game with modern technology with Battle Chess 3D. Are you a Potterhead? If so, you must remember the classic real-life chess game played in the dungeon by Ronald Weasley! With this game, experience a similar thrill while playing chess! Here are how the gameplay goes and few tricks that might help you to win the game with little effort.

The castle as early as possible to safeguard your king but make sure that all the squares surrounding the king are empty so that he can be moved anywhere when required. Don’t get the king in a trouble by squaring him up with no space to move. While opening with Pawn is considered to be the best move, a lot of chess players try to experiment with Knight or either with long Knight. This is a traditional approach and works well if you’re not playing against an experienced campaigner.

Make sure you know what your opponent is up to and plan your moves accordingly as the game progresses. Think hard about why your opponent is making a move, once you get in his/her mind, it will get easier for you to make your next move by challenging the move of your opponent. Losing pieces in the game is good until you’re doing it with a good swap. Say if you lost one of your pawns but you get rid of Knight, that’s a huge bonus considering how effective Knight can turn out while giving checkmate to the King! Ensure that you lose your pieces wisely or else you will run out of points when the game closes.

Attacking right from the word go doesn’t make sense but when the game is in the mid-way, you can surely do that. Given the advantage of having your big guns (pieces) halfway, you can turn on the heat with just a few moves! But keep an eye on what your opponent is thinking and what can be done to change his moves and get rid of maximum pieces in the middle of the game. Bishop can be very effective when you use it with Knight.

The game is always surrounded by pawn moves. As the pawns cannot take a step back and it may become a roadblock to your moves, make your pawns move accordingly. Plan the moves in such a way that your pawns aren’t your roadblock.

Pro Tip: Never underestimate or overestimate your opponent. He/she might play mind games with you to make a move that you don’t want to. This is where your chess skills are tested and your concentration too.

That said, we hope you got enough clarity of the gameplay now. Let us now have a look at some of the features of the Battle Chess 3D game!

The game is designed not only for expert players but also for amateurs making it just the right choice for all sorts of players. If you are an expert, you can dive into hours of strategic chess play and if you are still relatively new to the game of chess, then you can spend your time learning creative strategies in Battle Chess 3D. After all, strategy is the base of chess so get ready to use those rusty brain cells!

Battle Chess 3D unarguably offers its players some of the best 3D graphics on your phone. Feast your eyes with this game’s incredibly detailed graphics and experience immersive chess games! It’s not just the game’s 3D graphics that are intriguing; there’s also a Harry Potter Hogwarts-inspired chessboard to lend some flair to your games. Fans of Harry Potter will get a kick out of the humanoid chess sets and graphics, which offer a new element to the game.

Barbarian, Dwarf, Skeleton, Orcs, and Spartan are the five humanoid chess sets features by this game and each of them is fun to play in. As there are different types of players from beginners to experts, the game features three difficulty levels to choose from. You can choose to play this game only with your friends as well. Invite your friends for a tournament and have an intense chess battle or engage in one-on-one skirmishes.

So, what keeps you waiting? Get your moves ready with Battle Chess 3D and show everyone who’s the real boss!