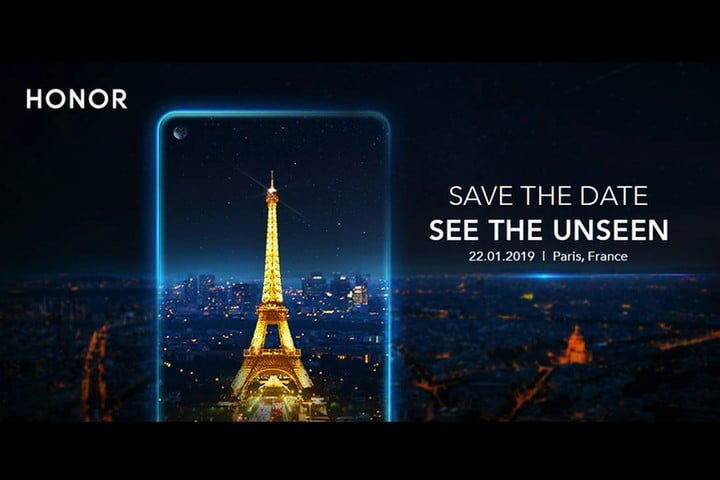 A few days after the announcement of the Nova 4 launch date by the Huawei, it seems like the sub-brand Honor too is planning to enter the In-display camera arena. As per the new report, the company is planning to launch a new smartphone with the display hole for the camera, alleged to be known as the Honor V11 or View11.

The hint for the same comes from Honor’s global PR manager, Bhavya Siddappa. In her recent tweet, she posted the teaser of an upcoming Honor smartphone along with the confirmation that it’ll carry an “in-display” camera. The teaser reads out “SEE THE UNSEEN” along with the launch date of Jan 22, 2019, and Paris, France as the venue for the event.

The attached image showcases the partial design outline of the smartphone with an edge-to-edge display. One can spot the moon on the top left corner which indicates the placement of display cut-out intended for the selfie camera. Additionally, the employee also touts the camera to be capable of creating images of unmatched clarity.

Which phone is this?

Well, there’s no rumour yet concerning an Honor phone with In-display camera, but if you look closely, the company launched two major flagships last year including the Honor V10 aka View 10, followed by the Honor 10. The V10 came in February while the latter arrived in May. Being a flagship offering, the upcoming phone is most likely to replace the existing V10. The exact name isn’t clear, but we expect it to dub as the Honor V11 or Honor V20.

Coming to the specifications, the Honor V11 will most likely get powered by the latest Kirin 980 SoC, just like the recently launched Honor Magic 2 and Huawei Mate 20 Pro. We may also see a large battery, AI-powered dual rear cameras and a Full-HD+ display.

A few days ago, a commuter was seen using an unknown smartphone having a display hole on the top left which is expected to be the Huawei’s Nova 4, scheduled to land on Dec 17. Note that the smartphone did have a 3.5mm jack which is a rare thing to see with phones having such design.

Lately, the Korean giant Samsung too has confirmed Dec 10 as the announcement date of its Galaxy A8s which will reportedly incorporate an Infinity-O display with a display hole for the camera. Let’s wait and keep an eye on the same. Stay tuned.