Honor as a brand has seen some ups and downs since last year. They had a pretty good start in the game and would’ve been a force in the smartphone segment but the trade war dented their plans. While they can’t really sell quality smartphones right now, no ones stopping them from selling other products, including a Windows laptop.

This is where the Honor MagicBook 15 comes into play. The product has been selling globally a while now and it seems like Honor finally has a banger on their hands as the laptop is selling out in good numbers in our market too.

Like most of you, we too tried our luck and finally managed to get hands-on a unit after trying in multiples sales. We have been using the MagicBook 15 close to two weeks now and while the laptop looks good for price on paper, we will pass on our judgement on whether you should buy it or not. So, let’s dive in.

When it comes to design, the MagicBook 15 looks and feels quite premium. Honor has not cut any corner with the material selection, especially for the chassis. The laptop is made out of Aluminium while keeping the weight in check. We get to see the display lid, the base and the bottom support all in aluminium silver shade. 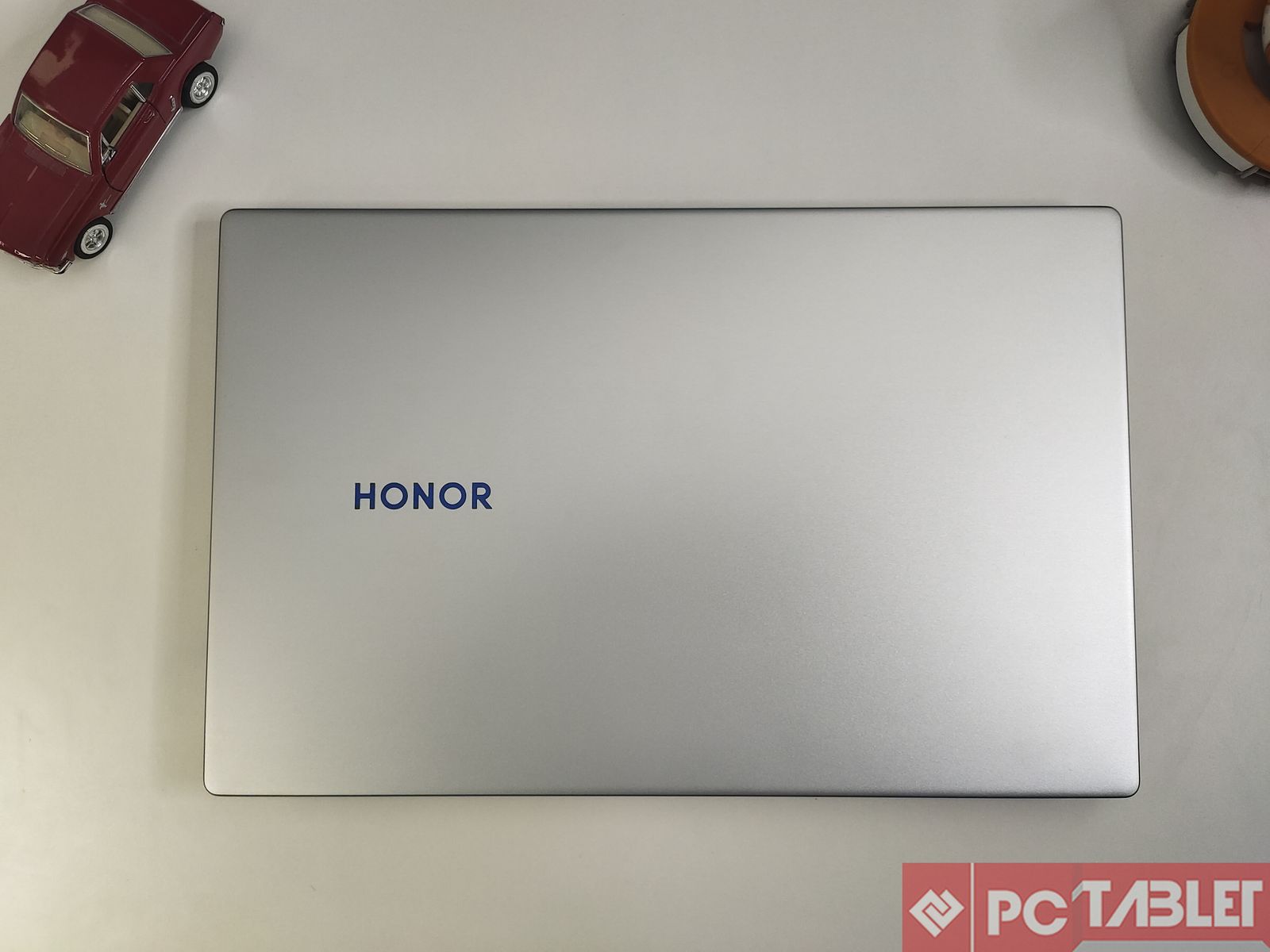 For a flair, Honor has painted the outer edge of the display lid in bright blue which gives the laptop a distinctive look when the lid is closed. We get to see minimal branding from Honor here which is appreciated. Coming to the lid and hinge, we get about 130-ish° hinge providing a decent experience. The lid is solid with almost zero flex. The only thing we didn’t like here was the poor weight distribution making the basic task of opening the lid with a single hand quite cumbersome.

Since the chassis is all-metal, Honor took some tips out of Apple’s playbook and added the antenna for WiFi and Bluetooth behind the laptop. So, if you turn the laptop a 180, you could see the plastic antennas sticking on the bottom. Barring this, all the components like the touchpad, keyboard all seem to be decent.

Overall, the Honor MagicBook 15 punches above its weight and offers a lot for the INR 43k asking price.

Honor has kept the I/Os pretty basic. On the left side, there’s a USB 3.1 port Type A, an HDMI slot and the Type C port which supports both Data transfer and Power Delivery (PD) and is used for charging the laptop. While on the right side there’s a single USB 2.0 port and the combo audio jack. 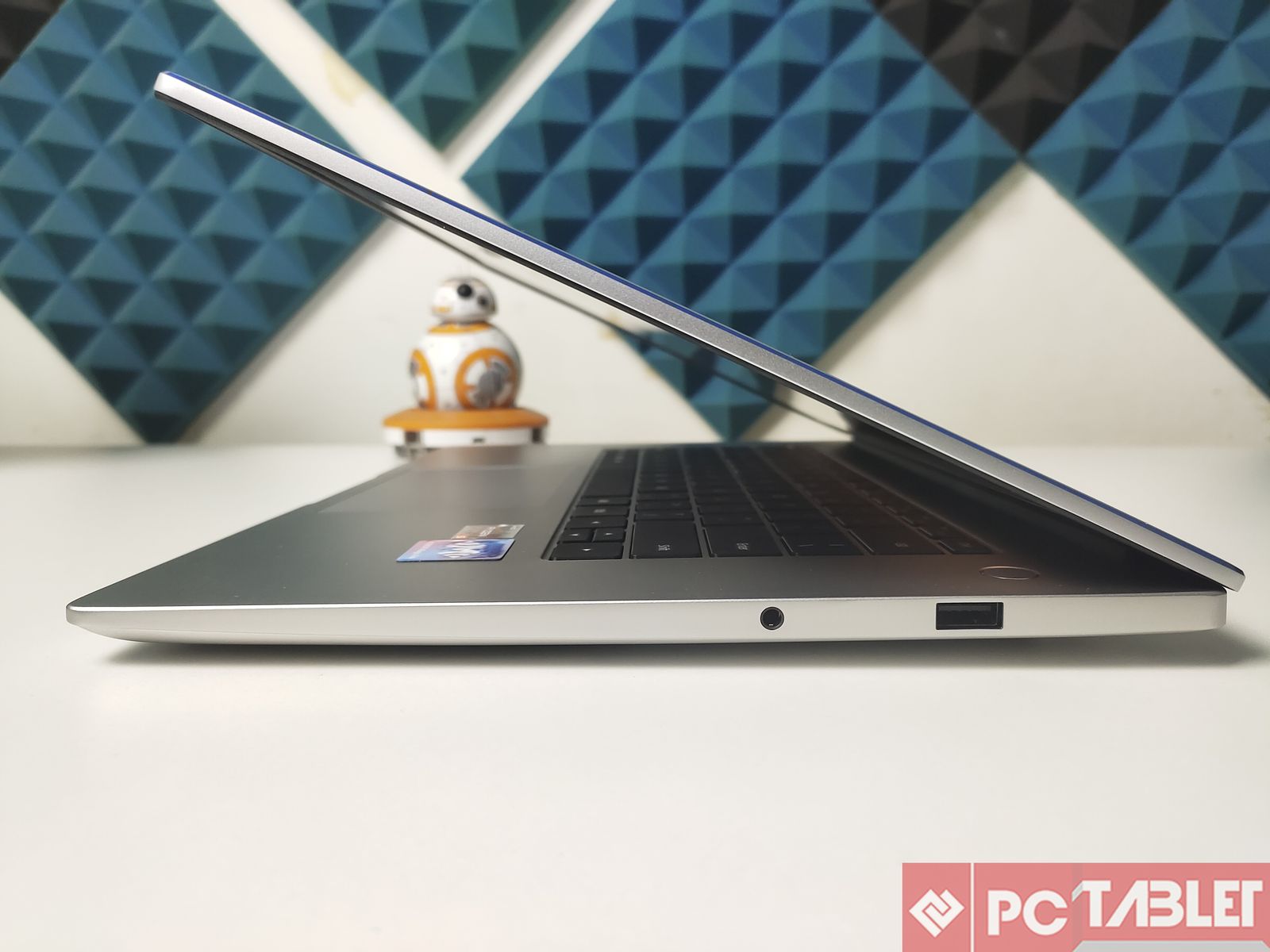 For us, the connections are on the lower side, and we would’ve loved an extra Type C port for sticking a dock to it. Since some of the somewhat ports like an Ethernet jack, microSD card reader are missing. Looking from the perspective of corporate users, these omissions may not be of-concern but for a student, they could. 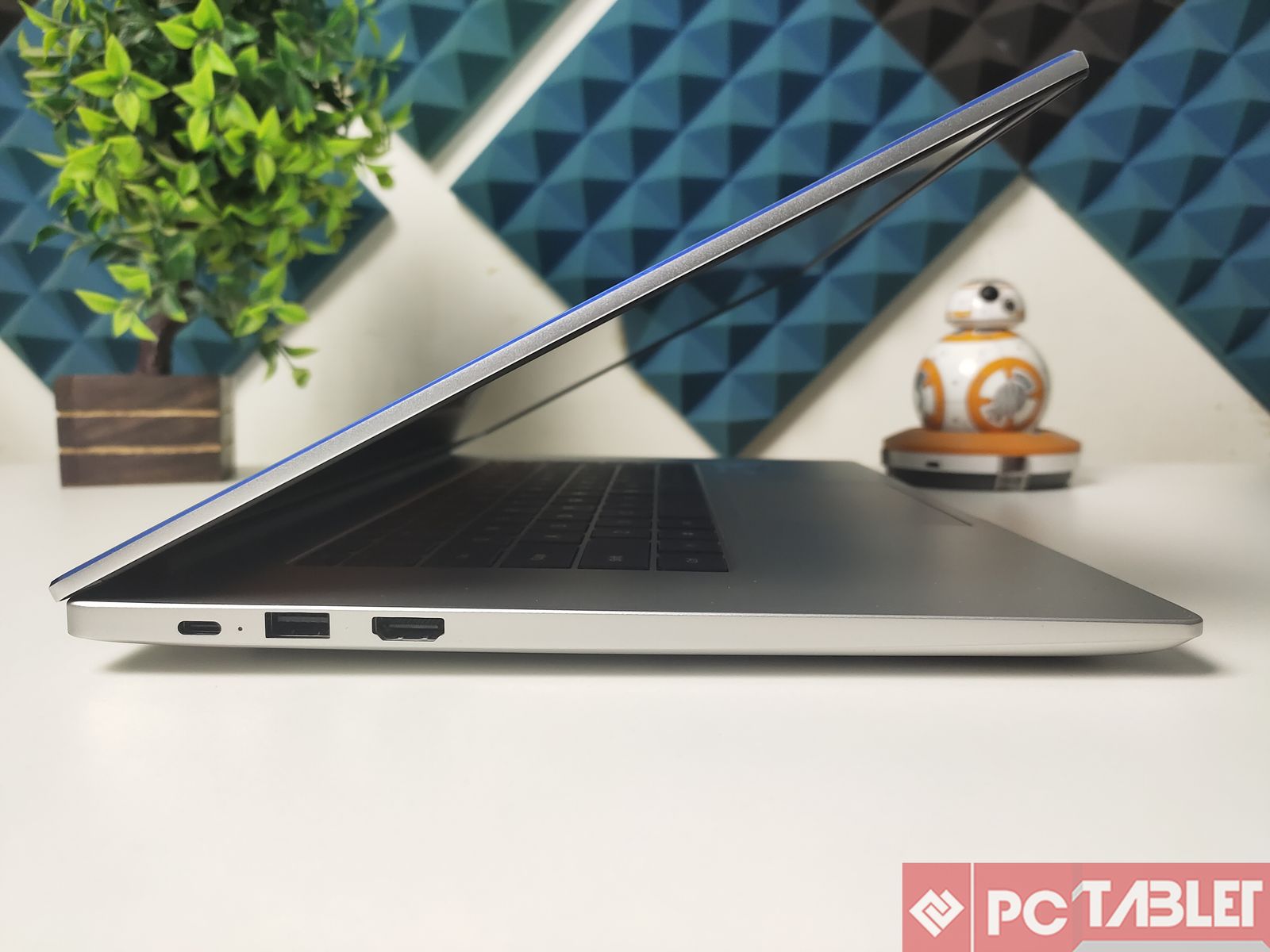 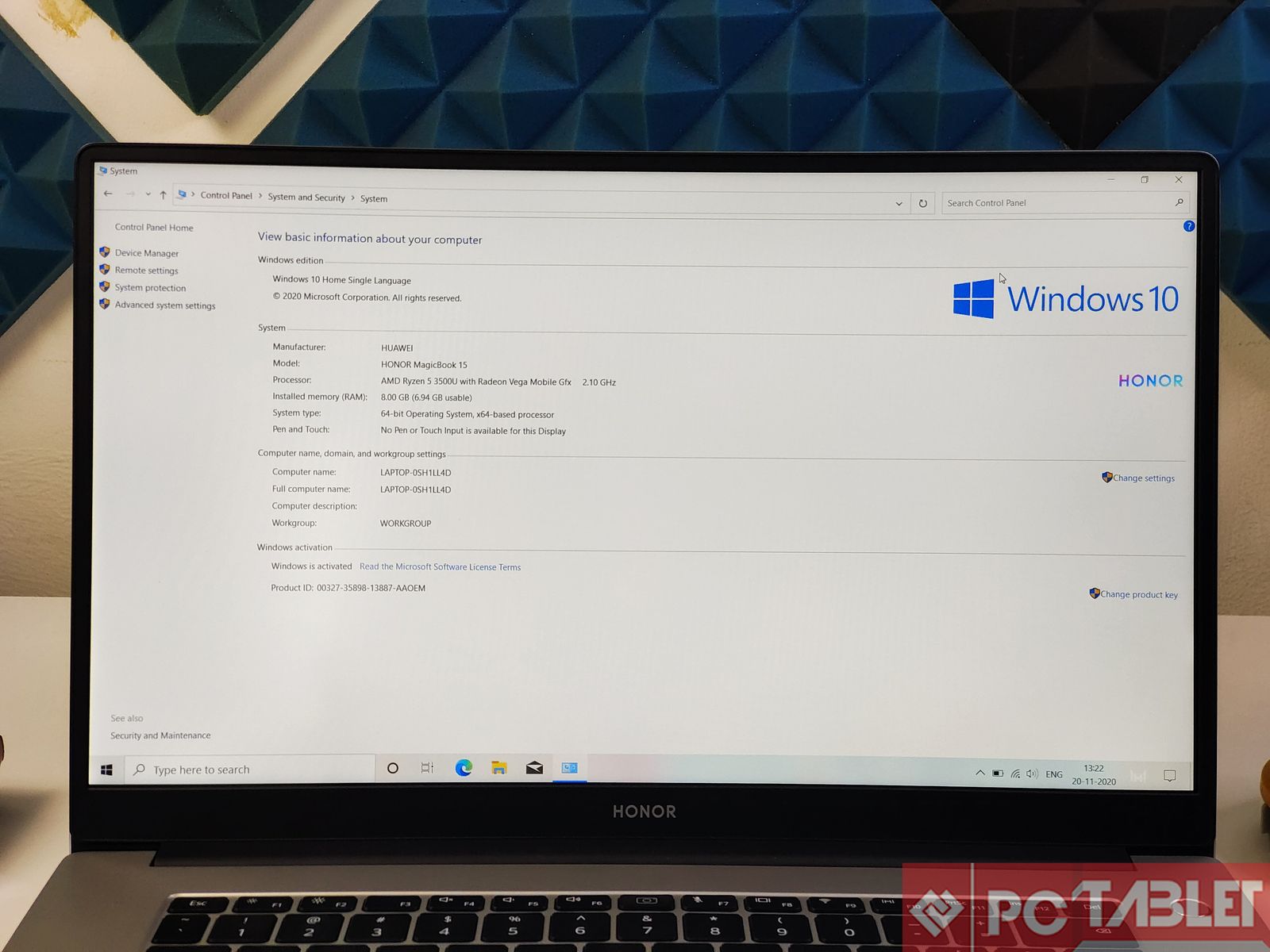 Just like smartphones, every OEM these days is bundling some software as well. We found some useful ones like the Blue light filter, HONOR Magic-link 2.0 useful for people with Honor phones having NFC to mirror and transfer files quickly between your phone and the laptop.

This is where our thoughts are divided. Some of our team members found the keyboard quality decent while others found the keys to be made out of cheap plastic giving out an unpleasant typing experience. The keys are themselves are adequately placed with the travel distance merely being 1.4 mm which is good for effective typing. 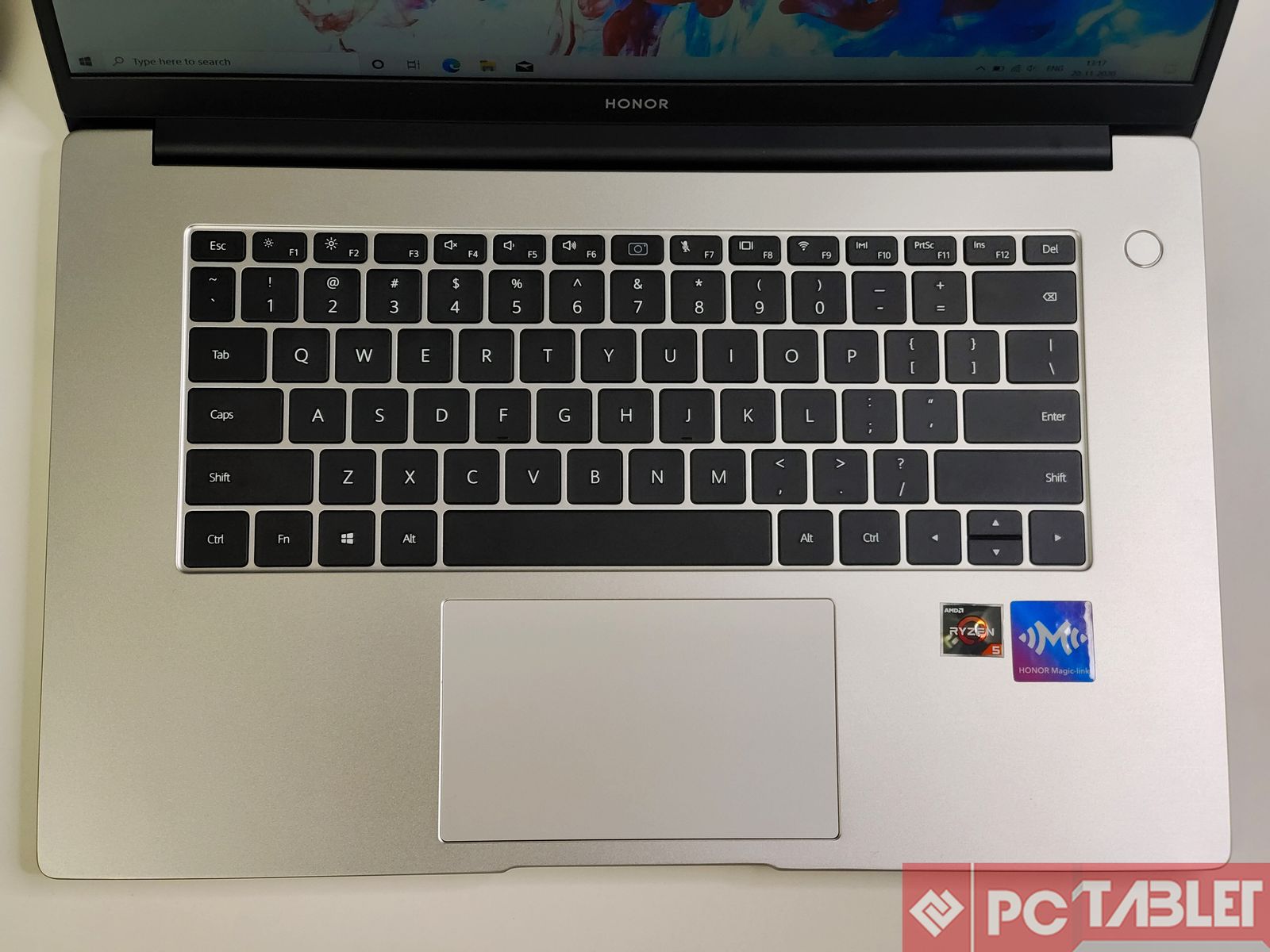 There is no backlight, which is a let-down but it isn’t really common in this price bracket. The only thing missing here is a full-length num-pad, which could’ve been a nice addition. Honor has cleverly integrated a fingerprint sensor inside the power button which sits to the right of the keyboard and supports Windows Hello drivers. 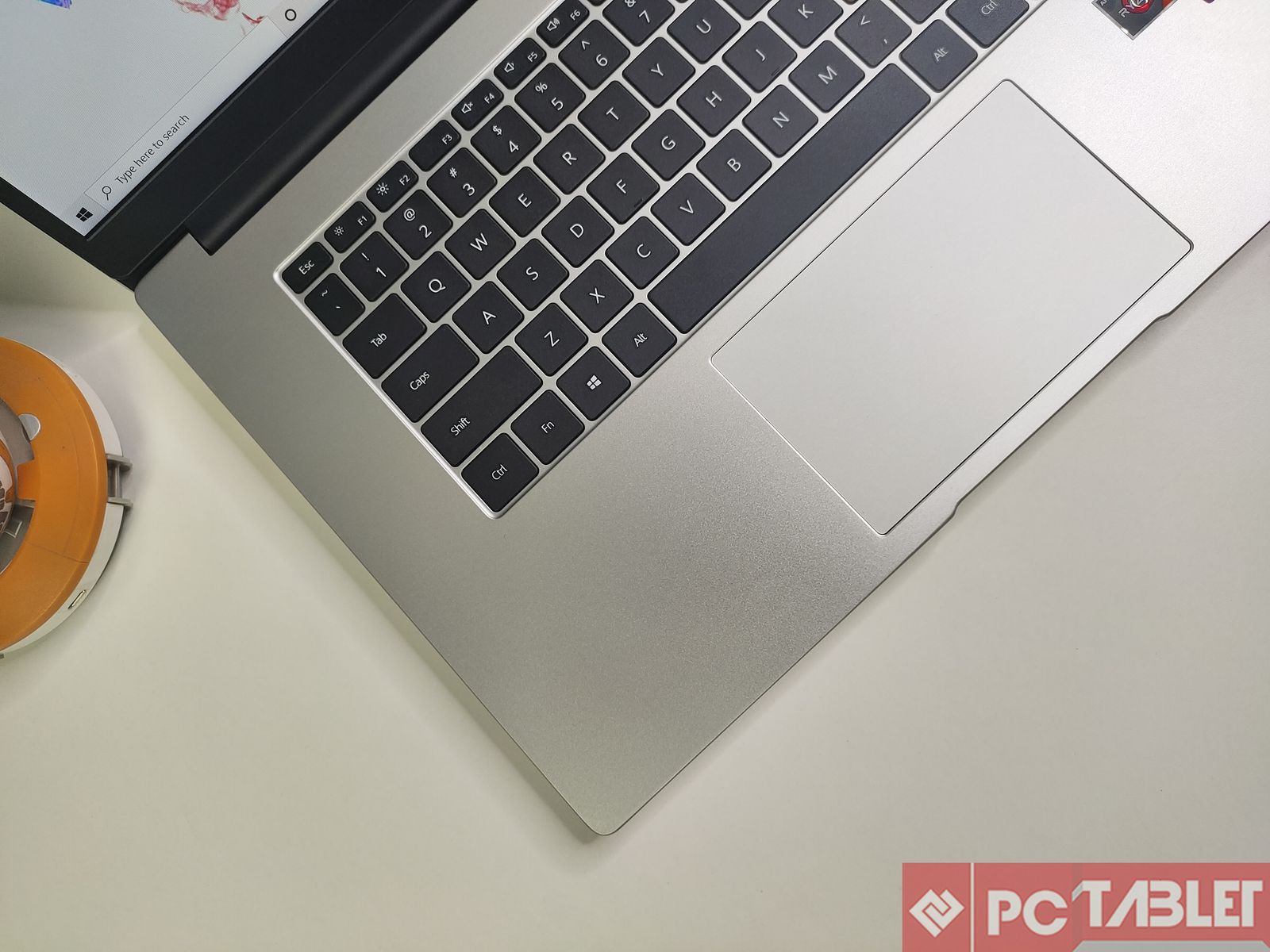 Moving to the touchpad, Honor has equipped the MagicBook 15 with an amply sized touchpad. It comes packed with Windows Precision Drivers which gives added ability to use gestures like 3 finger swipes to change desktop, 3 finger touch to launch Cortana. During our testing, we didn’t really have any issues with the touchpad’s responsiveness and feel.

You get a 15.6-inch 16:9 Full HD display with a resolution of 1920×1080 pixels. The display gets fairly bright and usage in harsh lighting won’t be an issue. We are essentially seeing a 15-inch display crammed inside the shell of a 14-inch laptop with the bezels cut to the minimum. 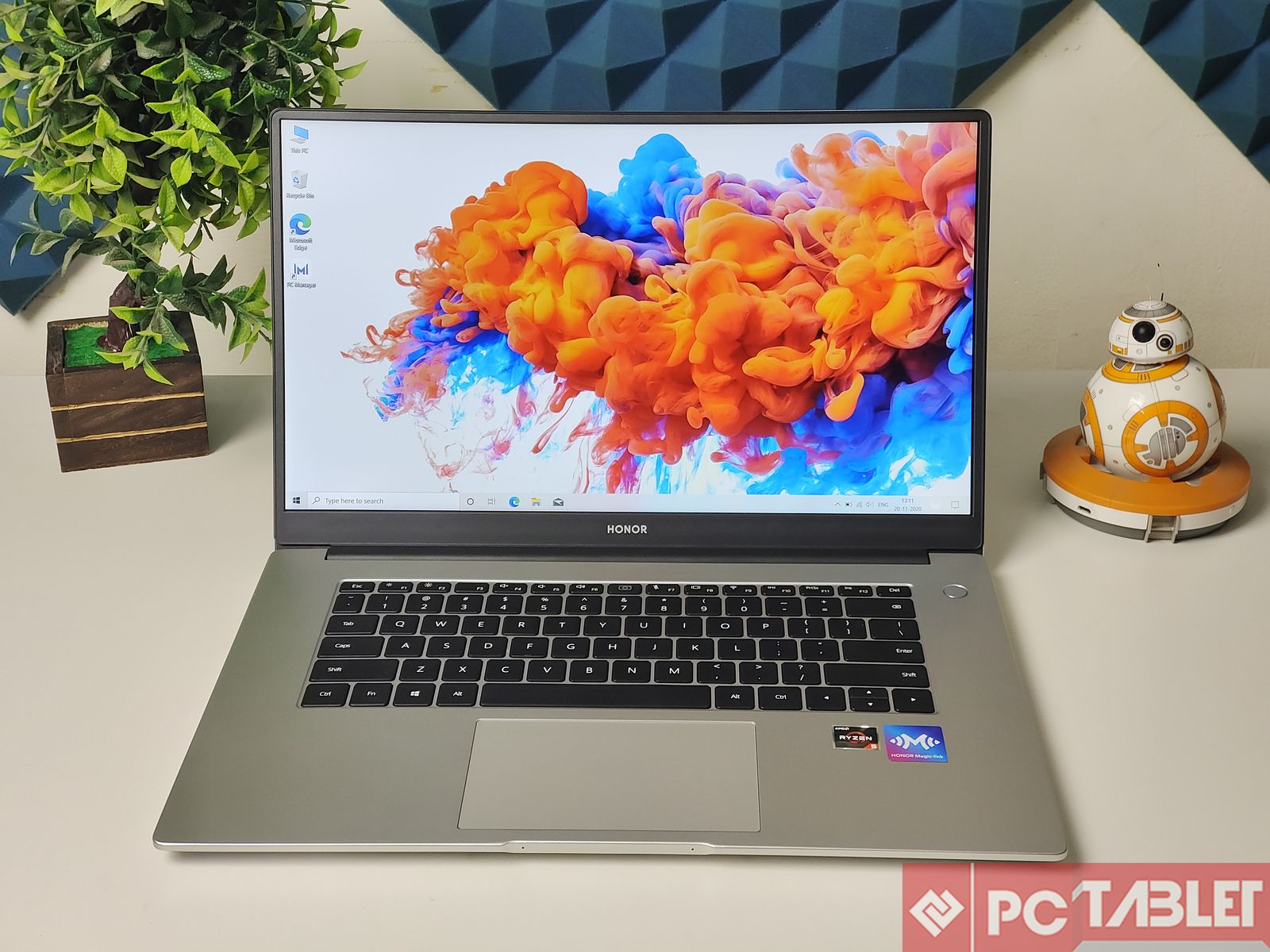 The colours profile right out of the box is on the cooler side and that can be fixed from the Display settings. We have a matte display so the viewing angle is not on the higher side but it surely helps in giving a better experience. Another nifty thing that you might oversee is the built-in webcam inside the keyboard. It’s hidden under a key which is a plus for security and privacy but you end up with a view up your nose during video calls which is annoying and embarrassing.

The performance on the MagicBook 15 that we have is top-notch. Since the laptop is available in only a single SKU, you don’t really have a choice of getting a beefier machine. While the newer generation of Ryzen processors is out in the market, this Ryzen 5 3500U still holds quite a punch. 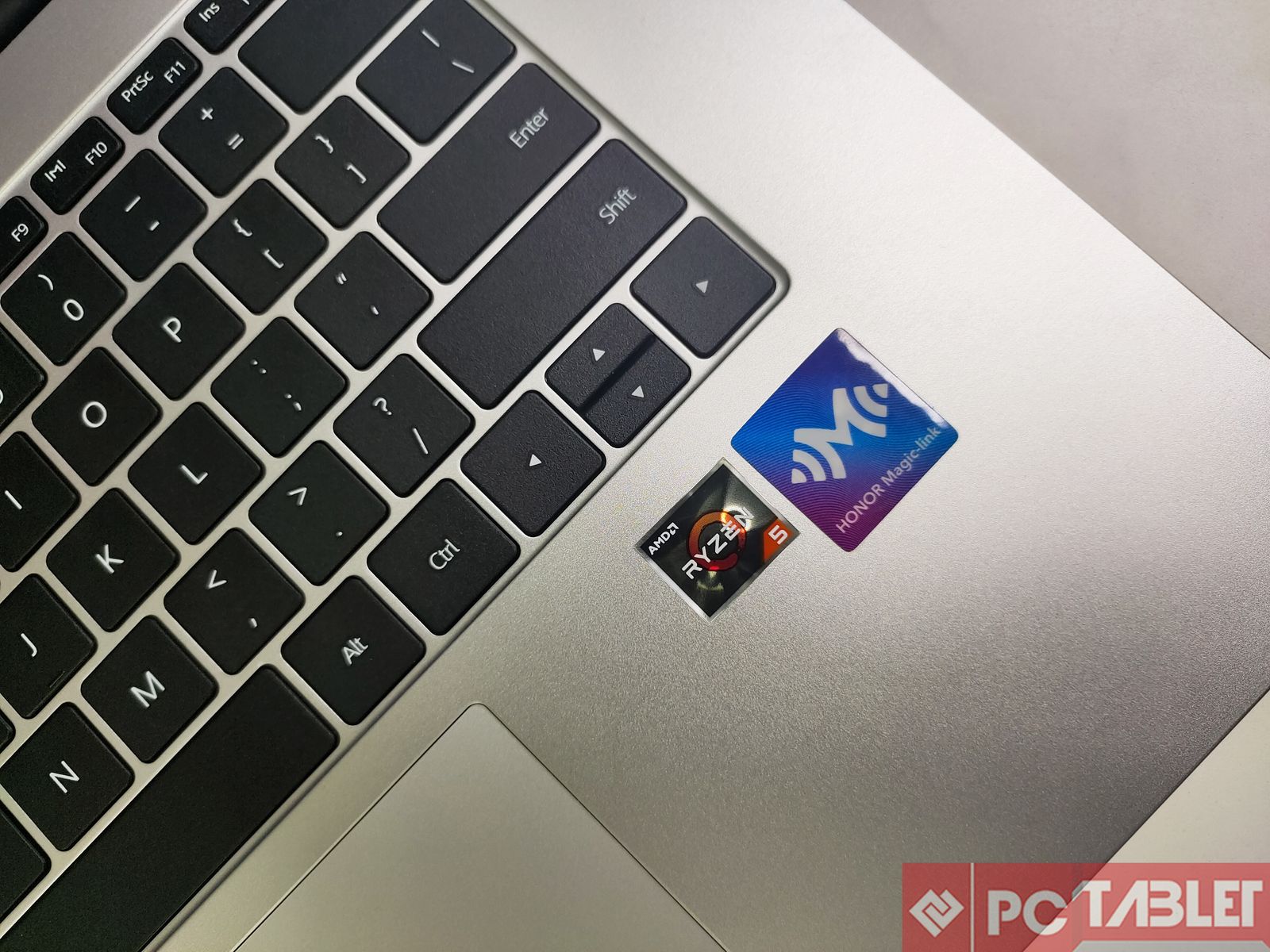 Indian SKUs have 8GB RAM at max but this expandable up to 32GB. Along with this, you have access to the integrated AMD Vega 8 graphics. There is no option of dual-storage and the SKU available in India caps in at 256GB NVMe SSD. The drive too can be upgraded but the procedure is quite tedious. The performance on the drive is quite good with average reads going all the way to 3,000Mb/s and write speeds in the excess of 1,500Mb/s.

Coming to the audio, despite being a business laptop, the audio output of the MagicBook is quite good. We have downward-firing speakers that somewhat sound tiny which is quite common on budget-midrange laptops.

The laptop comes packed with a 3,665mAh 3-cell battery. In our tests the battery lasted for about 7 hours with all the networking peripherals turned on, with the laptop on Airplane mode, you get up to 9 hours. 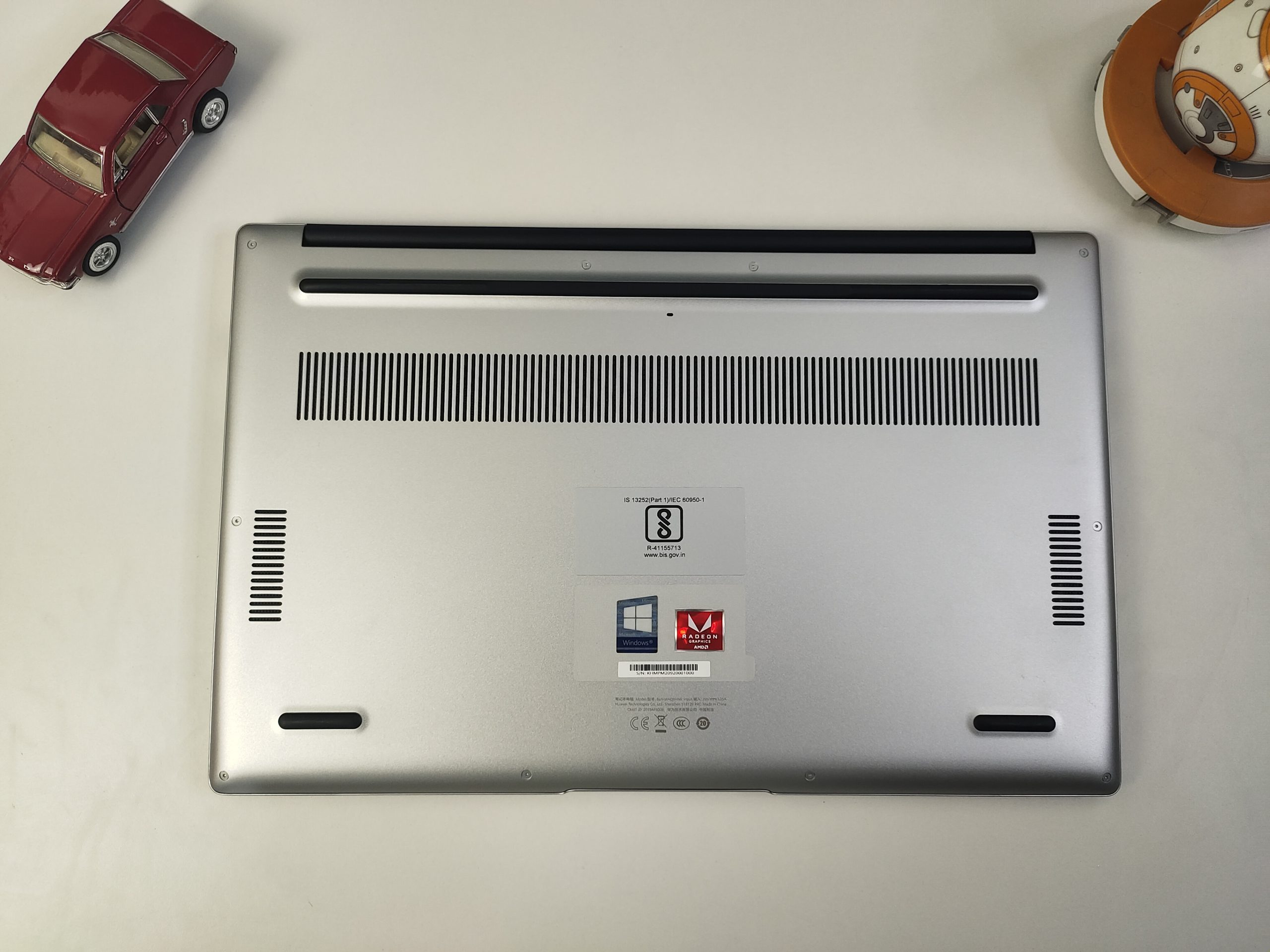 We get a 65W PD charger bundled in using which the MagicBook can be charged to 53% n just half an hour while the full charge takes up to 1hr 20 mins. 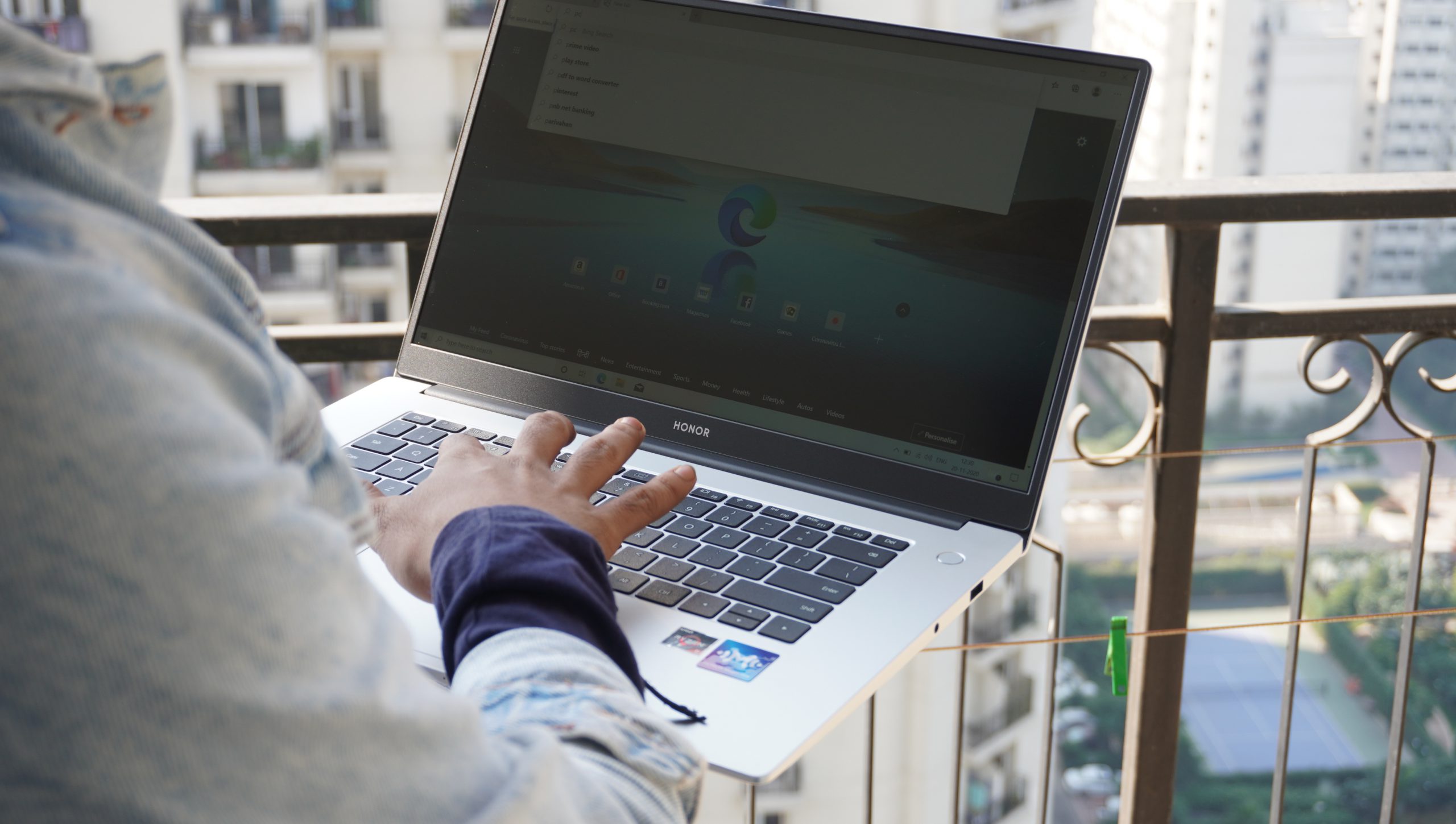 With all the sales going on, the prices for some of the best laptops higher than this have come down which makes takes out the appealing factor from the MagicBook. Coupled with the limited stocks that the brand is bringing in, things even get murkier.

If you managed to go past all this, for a sticker price of INR 43,990 the Honor MagicBook 15 offers a balance between performance and looks. We liked the sturdy metal build, 65W charging, good battery life. The downsides are the low RAM and storage, perhaps Honor could fix this for the future models by bringing in more SKUs for the Indian market.

Overall, we did like the Honor MagicBook 15 and it surely gets our recommendation.