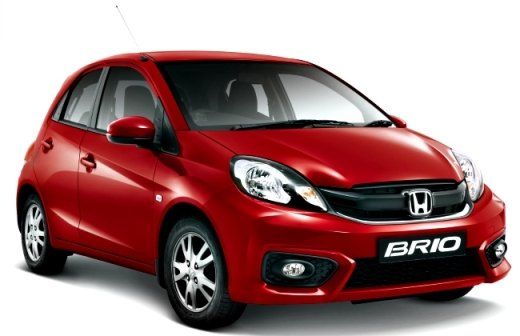 The Japanese car maker has finally launched the all new Honda Brio facelift version in India. Prices of the refreshed Honda Brio start at Rs 4.69 lakh and goes up to Rs. 6.81 lakh for its top-end variant (ex-showroom, Delhi).

The new Honda Brio was showcased earlier this year in Indonesia, sporting new exteriors, refreshed interiors along with additional features.

As far as changes go, the new Honda Brio gets a redesigned slicker looking front fascia with sharper angular front grille, along with a new sporty looking front bumper. These minor changes on the front have certainly enhanced the overall aesthetic appeal of the hatch.

The back of the car gets a new rear spoiler with the stop light, along with slightly redesigned taillamps. The rest of the exteriors of the Honda Brio facelift remain more or less the same as its outgoing version.

As far as interiors are concerned, the Honda Brio facelift sports a revamped dashboard. Notably, the interiors are strikingly similar to what we’ve seen on the Honda Amaze facelift, featuring an all new premium instrument cluster decked in carbon and silver accents. The interiors also get a triple analog sporty meter coupled with white LEDs that exude a rather premium look and feel. It also rocks plush-looking Beige Interiors while its top-of-the-line variant gets new sporty all-black interiors.

In terms of features, the new Brio comes with an Advanced 2 DIN integrated audio system with Bluetooth connectivity through you can connect your iOS or Android smartphone. Besides, it also features steering mounted controls, touch sensitive air-conditioning system for hassle-free driving, along with power windows and power steering. The new Brio will be available in 5 colours – Taffeta White, Alabaster Sliver, Urban Titanium, Rally Red and White Orchid Pearl.

Despite its compact form factor, the Honda Brio comes equipped with a rather powerful engine in comparison to its overall weight. Besides, its core appeal lies in its ability to maneuver in the busy and super-crowded Indian cities easily.