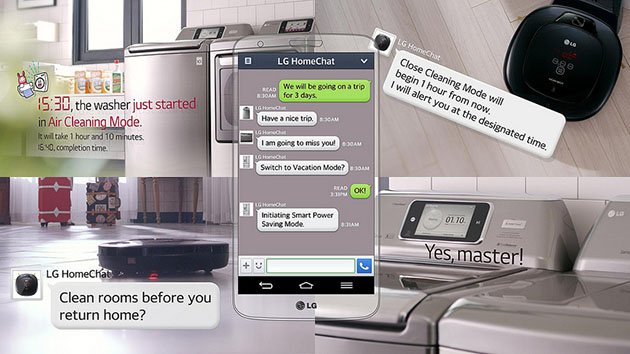 Korean giant – LG Electronics will have something special to display this year at CES, scheduled this month. We have learned, the company is planning to demo a new technology under the name ‘HomeChat’ that would allow users control LG smart appliances via a simple text messages from Android and other smartphones.

LG has turned the idea into a reality by collaborating with a popular communication app called LINE. For smartphone users, LINE is no new name. The application allows you to make FREE voice calls and send FREE messages whenever and wherever you are, 24 hours a day! It already has more than 320 million users worldwide in over 231 countries!

LG’s HomeChat technology, combined with the popular mobile messenger Line, will take advantage of a Natural Language Processing (NLP) technology. The technology would permit users send simple messages to their appliances – provided these are smart devices – from a variety of mobile devices and computers. What this implies, the home appliances will be pre-programmed to respond to simple text messages and react accordingly.

Commenting on the announcement, Seong-jin Jo, president and CEO of the LG Electronics Home Appliance Company said, “Always at the forefront of innovation, LG is continually striving to inspire smarter consumer lifestyles in meaningful ways. We’re excited to be able to bring to CES our smart appliances with the newest communication and intelligence capabilities.”

LINE if you know has been ranked as the #1 most downloaded app in 52 countries including Japan, Thailand, Taiwan, Spain, China, Indonesia, Singapore, Hong Kong, Malaysia, India, Switzerland, Saudi Arabia, Mexico, Russia, Macau, United Arab Emirates and more! Its partnership with LG will further promote and expand the user base. Initially, the text commands and answers will be available in English and Korean, with more commands to be added in the future.