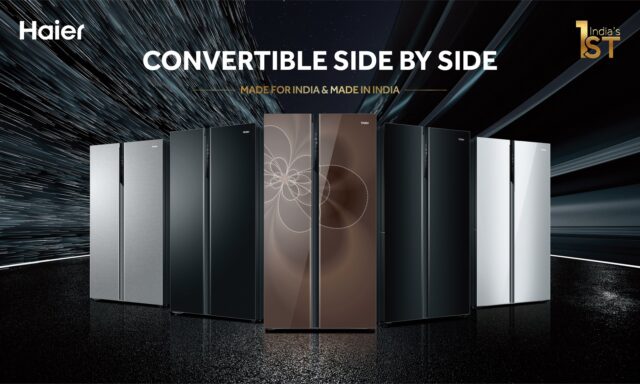 Haier has introduced a new range of premium refrigerators in India which the company claims have been made specifically for India. The Chinese company also stated the new SBS (Side-By-Side) refrigerators are also being manufactured in India. Comprising of two-door and three-door models, Haier said the new refrigerator series are also user customizable to ensure optimum space management while also offering the best of features as well. The new SBS series will be joining the HRB series of high-end refrigerators from the company.

The Chinese electronics major said their new SBS refrigerator series is the result of an extensive consumer research program to ascertain exactly what consumers in India want out of their refrigerators. The research revealed consumers long for an SBS refrigerator that has a larger cooling section. Further, the refrigerator should also put the consumers at the center of all the action. In other words, the controls should be at the hands of the users so that they can customize the same as per their requirements.

Haier said the new SBS series conforms to exactly what buyers expect out of their refrigerators. For instance, the 682 series comes across as the first 2-door SBS refrigerator that is entirely convertible to function solely as a refrigerator unit. It has a fridge to freezer ratio of 66:34 though the 34 percent freezer space can be used as a refrigerator when needed.

The 683 series forms the more up-market offering with an even better user customizable section. The refrigerator series offers a 21 percent convertible section. The design is such that the user has the ability to increase the refrigeration space from 62 percent to 83 percent. At the maximum refrigeration setting, space earmarked for the freezer is reduced to only 17 percent. Just in case the user requires more freezer space, that can be increased to a max of 38 percent. Then there is a Hanging Flexi box too that serves as a storage space for cosmetics or other such items.

Among the other salient features of the new Haier range of refrigerators include Deo-Fresh technology, which, together with the Magic Cooling feature ensures food remains fresh and hygienic for longer durations. There are enough storage spaces around to store different items such as beverages, vegetables, and such conveniently. Plus, there is a jumbo ice maker too, as is a fresh box.

Here is the price structure of the 682 and 683 series of Haier SBS refrigerators.