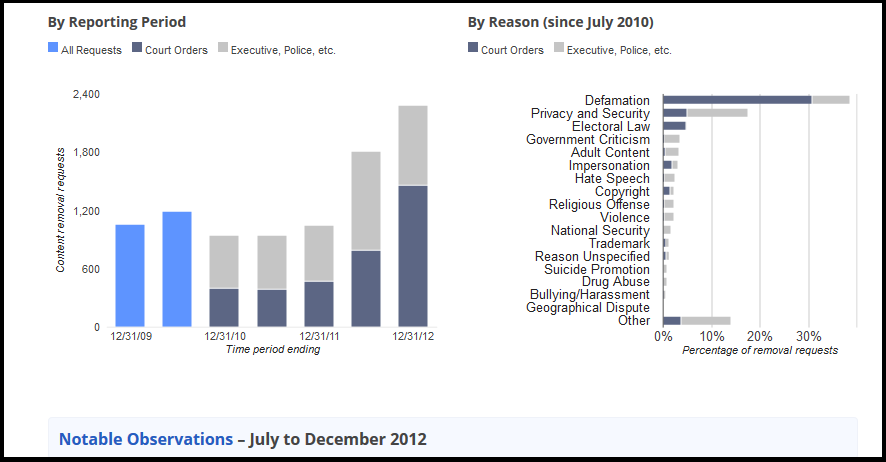 Google released its eighth Google Transparency Report some days ago. The report outlined the number of government requests for Google user data have doubled in the past three years. The US topped the list of countries requesting data, followed by India. Germany and France occupied third and fourth position.

In the six month period Indian authorities made 2,691 requests related to 4,161 users/accounts. This is a growth of about 11 per cent since the last Google Transparency Report. Google managed to comply with 64 per cent of the requests from India.

Google’s explanation for the demands –

‘This comes as usage of our services continues to grow, but also as more governments have made requests than ever before. And these numbers only include the requests we’re allowed to publish,”

The search giant has been trying to add more details to its reports, aiming at better transparency. The current report covers the period mainly before the global spying scandal, PRISM whose information was leaked by National Security Agency’s security contractor, Edward Snowden. It was a secret American surveillance program.

We received a request from a city Cyber Crime Investigation Cell to remove current depictions of disputed borders of Jammu and Kashmir in five Google Maps domains other than maps.google.co.in. We did not change our depiction of the borders in response to this request.

The number of content removal requests we received increased by 90% compared to the previous reporting period, highlighted Google Transparency Report.

Several other companies, including Microsoft, Apple, Facebook and Yahoo, follow the same suit of disclosing government requests for personal data, which cover such things as email communications and the search queries made.