After officially confirming at Google I/O 2017 earlier this year, the search engine major has reportedly started rolling out its much-awaited ‘Google Play Protect’ feature for Android devices, running on Google Mobile Services 11 or higher versions on Wednesday. The Google Play Protect is a feature that is programmed to notify users when a particular app instigates acting strangely or starts showing signs of risk for the device.

Though officially the roll out of the feature is yet not confirmed, Engadget has claimed that Google has verified the report of launching the feature on Google Play Store to it.It has been not one year to Google put forward the idea of adding a new app or feature to its Play Store for ensuring better security to the users and on Wednesday, the California-based company has reportedly started rolling out it to its global Android users.

Android users, with mobiles running Google Mobile Services 11 or higher versions will be able to enjoy the new improved safety feature of the Google Play Protect App. Google Play Protect is a new feature part of Google Play which is designed to monitor and scan the apps which may pose risks or cause harm to your Android smartphones and devices and provide updates, notifications and more information about the security of your device. 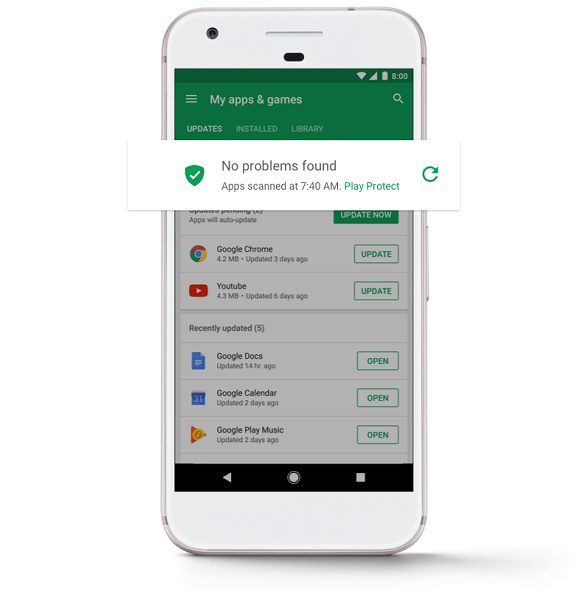 Play Protect will automatically scan the Android device for ensuring the complete safety of the device, stored data, and applications.As some speculative reports added, the new Play Protect feature, available in Google Play Store app is taking longer time to turn up for users the roll out for this app was conducted a little later. Though the Google Play Protect feature automatically scans the android apps, running in the background, but users can also manually solicit the safety feature to start scanning for abnormal and unsafe behaviors of the app.

The new app feature has replaced the “Verify Apps” feature of Google for becoming more relevant to the Android user and providing better and more detailed information about the safety scans of devices. As officially confirmed, Google is on the way to add its Find My Device as a part of Google Play Protect as the features need an instant upgrade and redesign.

Google is planning to add a friendlier interface, a new icon, a superior battery, an indicator for Wi-Fi status, and detailed information about the last known location of the device for helping users to find their lost phone more quickly. As Android, since long has been beleaguered with issues like security holes because of which millions of android devices have been affected by a malware attack, the launch of new security feature by Google is a robust and welcome move for ensuring better security to Android users.