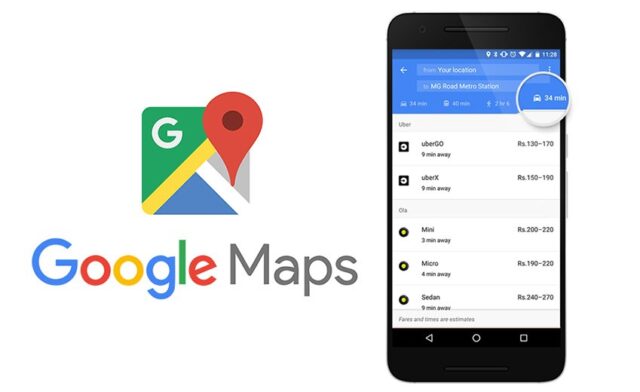 16th March, 2016 – Google has announced that users of Google Maps will be able to view and compare cab options within the app. The service has been rolled out for all devices running on Android platforms and and the same is expected to come to iOS devices shortly. Google currently lists cab services for ‘Ola Cabs’ and ‘Uber’ in all major cities in India.

It can be cumbersome finding your way around a new city, or even a new place in a city you know well. Traditionally, Google Maps would allow you to feed in the destination you wish to go to and would route you to it by allowing you to pick from either a walk, a drive or public transport. With the upgraded Google Maps app, you will be able to pick from a fourth option ‘Cab’.

If the user happens to have the cab service provider’s app on their phone, the Google Maps app will also allow you to compare fares between ‘Ola Cabs’ and ‘Uber’ within the Google Maps app and list any cabs which may fall in the same vicinity as the user. The currently functionality allows ‘Ola’ users to pick from ‘Ola Mini’, ‘Ola Micro’ and ‘Sedan’ form cabs while ‘Uber’ users can make a pick between ‘UberGO’ and ‘UberX’ cabs.

In order to complete the cab booking, you will select the type of cab service you desire within Google Maps and once clicked on, it will take you to the native app provided by the cab service to fulfil your request.