Google Maps for Android has been updated with a handy shortcut to the Traffic Nearby screen. According to reports coming in, Google has just released a new update with Version 9.39 for the Google Maps to enable you to quickly view real-time traffic information around your area.

Prior to the introduction of these new features, you had to provide a destination name or activate the Driving Mode to view traffic statistics for the particular location.

The version 9.39 simplifies this approach by introducing a useful shortcut to enable you to view traffic information. Once you update the app, you will view Traffic Nearby shortcut, which quickly redirects you to the relevant screen. 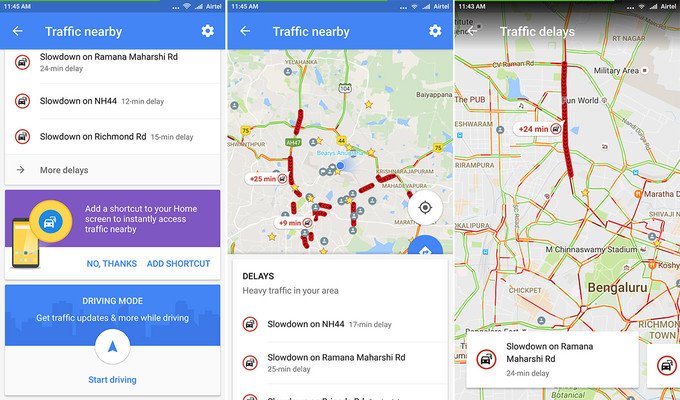 The new feature will be useful for those users who would like to want to poll the information collected from the traffic without setting a destination. If you would like to go out for lunch or an informal party, you should be aware of the capacity of the traffic. This will help you to avoid traffic jams. The Traffic Nearby feature plays a vital role in situations, where the traffic is comparatively high.

As a user, you can also add a shortcut to the Traffic Nearby feature directly to your home screen dashboard. You need to open the widget library and place the relevant 1×1 shortcut in any of your home screens.

As of this writing, the new shortcut is only available for Android phones. If you are unable to work with this feature, you need to wait for some more time since Google is rolling out Traffic Nearby feature in batches.

According to sources, the Traffic Nearby feature is part of the latest series of updates developed to leverage the maximum potential of Google Maps.