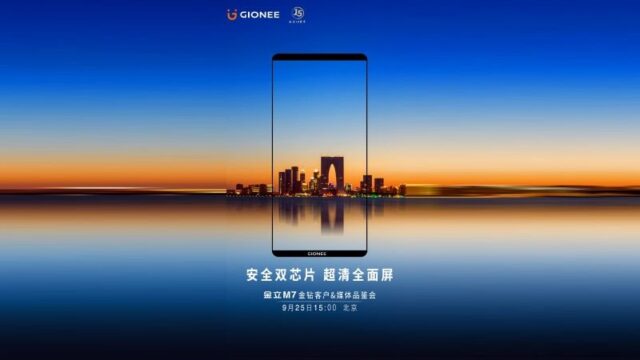 Gionee has finally announced that it will launch the M7 smartphone in Beijing on September 25th. The event will start at 3 PM China time (12:30 PM IST). The smartphone also confirmed to equipped with Samsung’s AMOLED full-screen display and ultra-high security level data encryption chip for secured payment. Gionee recently scheduled an M7 Power event in Thailand on September 28th. This smartphone will also come with a FullView display and a massive battery.

However, earlier the smartphone was teased by the company on their official website last week. The teaser indicates that the M7 smartphone will follow the same aesthetic attributes of a bezel-less smartphone in 2017. Moreover, the company also rendered some images of the front panel of the phone which implies that M7 will launch in three color variants i:e White, Black, and Gold.

The Gionee M7 smartphone was previously spotted on the popular benchmarking site GEXBench. The listing already leaked some of the specs of the smartphone, i.e., 6 inches Full HD+ panel which will come with 18:9 aspect ratio. The smartphone will propel by 2.39Ghz MediaTek Helio P30 chipset paired with 6GB RAM and 64GB ROM.

The M7 smartphone will run on Android 7.1.1 (Nougat) operating system out of the box. Regarding optics, the smartphone may be packed with a 16-megapixel rear and an 8-megapixel front-facing camera. On the audio front, the company may opt for DTS surround sound support and a dedicated audio chipset.