As the New Horizons probe speed away from the dwarf planet Pluto and its moons, it is still beaming pictures from some 5 billion kilometers away. This information is being received as a trickle but what has been received can be termed amazing. The pictures can be described in the words of Alan Stern, mission in charge as fabulous, and it seemed the solar system had saved the most intriguing to the very end.

The image of Pluto’s moon Charon sent by the spacecraft looked so bizarre and had the experts poring over them. Most of the images that are being received from the spacecraft is compressed JPEG. The probe cannot take pictures and send it back to earth immediately. The spacecraft is taking measurements of the dwarf planet and its moon and storing it in its database to be sent later. There are high-resolution pictures are presently stored in the hard disc of the probe and will be transmitted later.

The spacecraft took a close-up of Charon when it was 79,000 kilometers away on Tuesday. The surface is smooth dotted with craters. Some of the craters feature central peaks that are common with large impacts. The long channels are collapsed lava tubes much akin to what is seen on the moon. It could also be fault lines or cracks where the ground surface has cracked. 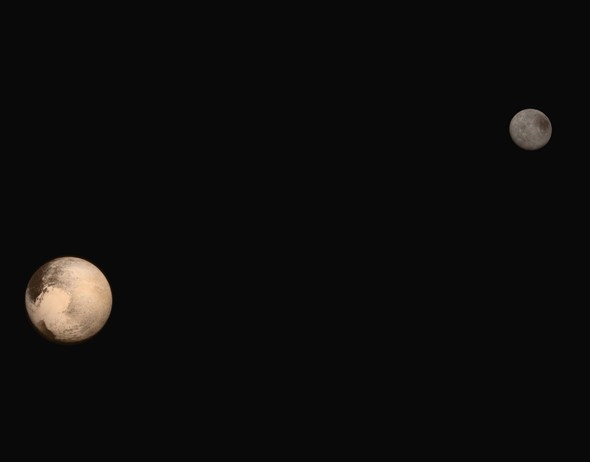 There are many mysteries that need to be solved like the feature on the upper left part of the picture. There is a mountain sitting in the middle of a depression. It is unusual for a mountain to be formed on Charon. There is no other similar structure on Charon further adding to the mystery.

Scientists also do not know how the mountains were formed on Pluto. Some of these mountains are 3 KM high but are made up of rock hard ice. The mountains has been named Norgay Montes, after the Nepalese Sherpa, who guided Sir Edmund Hillary to the top of Mt. Everest