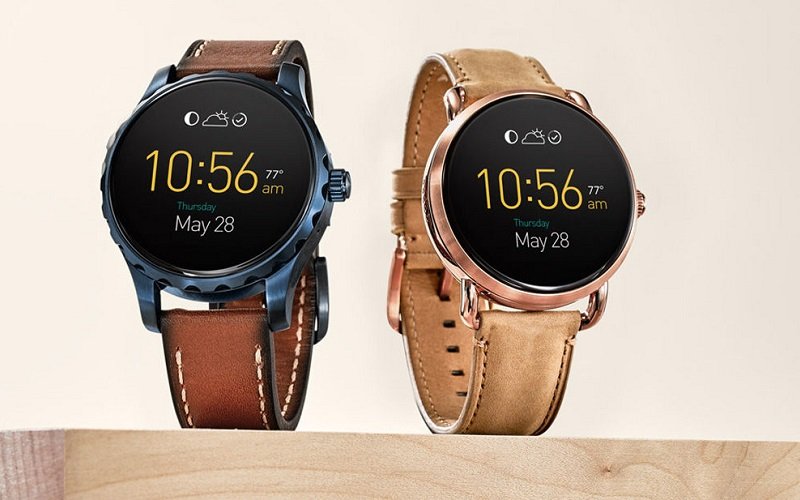 US-based luxury watchmaker Fossil finally enters the Indian wearables market with the launch of its Q range of smartwatches. Besides, it has also unveiled a slew of connected devices across it other owned brands which include Fossil Q, Michael Kors Connected, Skagen Connected Chaps, Emporio Armani and Misfit.

Let’s kick things off with Fossil’s Q series lineup, which includes Q Wander and Q Marshal smartwatches. These watches are equipped with Android Wear functionality combined with a top-no design

Both Q series smartwatches get the same set of specifications which include a 1.4-inch LED with a 320 x 190 pixel resolution, 512MB of RAM and 4GB of built-in storage. Other key features include an Always On Display, along worth Bluetooth and Wi-Fi connectivity.

Also, both get IP67 certified water resistance and run Android Wear out-of-the-box. The Q Wander looks pretty similar to the 2nd gen Moto 360, though is slightly larger in size.  It gets interchangeable 22mm straps and also comes loaded with a plethora of watch faces. On the other hand, the Q Marshal is a more of a subtle looking masculine smartwatch. It sports a rugged case and offers interchangeable metal and leather straps.

Users can respond to messages by just tapping on the watch’s screen or by using voice commands. Besides, users can also listen to music and receive navigation alerts via the in-built microphone and speaker.

Fossil has also launched the Misfit Shine 2 and Misfit Ray activity trackers in India. Prices start at Rs.7495 for the base model; these wearables are out-and-out fitness trackers allowing users to keep track of steps, calories burned, sleep monitoring, and more.

The Skagen Connected range includes Hagen connected hybrid smartwatches and a Skagen connected activity tracker. The Danish-watchmaker’s products are known for its clean lines and subtle design. The Skagen Collection is priced in the range of Rs. 14,295 and Rs. 15,495.

Next in the lineup is Chaps range of hybrid smartwatches that offer a classic look and feel, along with fitness tracking capabilities and notification access on the watch itself. Pricing is between Rs.9,995 and Rs. 10,495.

Last but not the least, Fossil also brings connected hybrid smartwatches from the highly-acclaimed designer Emporio Armani. They’ll come with features such as activity tracking, calorie count, sleep monitoring along with notifications alert. The Emporio Armani range of smartwatches will be available in four metallic finishes which include Rose Gold, Black, Gunmetal and stainless steel coupled with either a three-link bracelet or a leather strap.