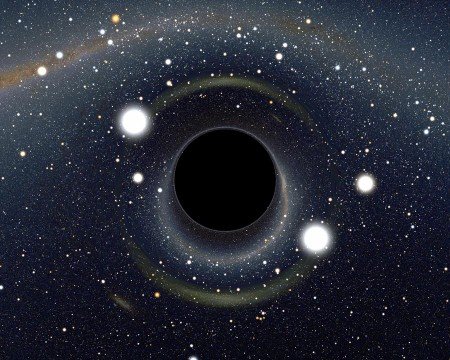 Till date scientists have discovered small black hole with the mass of a few suns to super-massive black hole with a mass of millions or billions of suns. Astronomers have found out one more missing links in the cosmos-middle weight black holes which are hidden within a dense star cluster.

These intermediate mass black holes weigh between 100 to 10000 times the mass of the sun. Researchers affiliated with Harvard-Smithsonian Center for Astrophysics (CfA) and the University of Queensland (UQ) believe that they have unearthed one such intermediate-mass black holes (IMBHs), which weighs about 2200 suns and is hiding at the center of a star cluster labeled 47 Tucanae.

The 47 Tucanae has located about 13000 light years away from Earth. The star cluster has been scanned in the past for black holes, but nothing showed up. The anomaly was in the method of detecting black holes which envisaged watching for the x-rays emitted from the outer edges of the black hole when it devoured stars and gasses. The absence of any gas in the center made the black hole in the heart of 47 Tucanae almost invisible.

The next method is to observe the gravitational effects of the black hole on the stars which revolve around it. This also did not suffice to make the black hole in this case because the star system was very dense and it was not possible to separate the motion of the individual stars in a small space of 120 light years.

Instead of watching the stars individually, scientists study the movements as a whole. The cluster’s density means that the heavier stars are towards the center in closer proximity to the black hole. The black holes will cause their speeds to increase. Comparing computer simulation, the astronomers found the 47 Tucanae behaving exactly as predicted in the simulations.

According to the lead author of the study Bulent Kiziltan, these intermediate-mass black holes are the missing link between the stars and the supermassive black holes. In other words, they act as the primeval seeds which then grow up into gigantic monsters which are present in the center of all galaxies including our Milky Way Galaxy.