Social networking giant Facebook, for the first time in the United States, has activated its Safety Check feature for users in the aftermath of a mass shooting at a gay nightclub in Florida on 12th June. More than 50 people were killed, and at least fifty-three were injured in this horrendous act.

This feature allows people to use tool to notify their loved ones that they are safe in the wake of massive terror act or any form of disaster. In this feature, users can access Safety Check to see if their loved ones are safe. The moment the person selects the option to click on the button that I am safe, all his/her friends get notified about it.

Mark Zuckerberg, Facebook Chief Executive posted, “This morning when I woke up I was deeply saddened to hear about the shooting in Orlando. My thoughts and prayer are with the victims, their families and with the LGBT community.”

Facebook activated this tool after a gunman armed with an assault rifle killed 50 people in a gay nightclub Pulse on Sunday. Facebook reportedly issued a statement stating, “We just hope that people in that area find this tool useful for them and can inform their loved ones about their safety.” 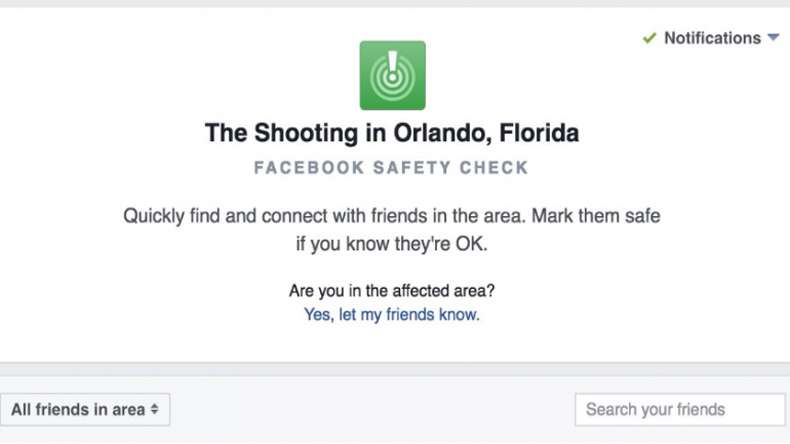 The gunman named Omar Mateen 29, an Afghan-origin was killed by the police after he took hostages at the nightclub. Barack Obama, US President, called the gruesome act as an ‘act of hate’ and ‘act of terror.’

Facebook feature Safety Check was launched in October 2014 and was activated on series of terrorist attacks in Paris in November and the earthquake in Nepal that affected the entire region. Other than this, the safety feature was activated during the emergencies in India, France, Pakistan France, Nigeria and other events that have left a severe effect on the people. Moreover, Facebook also activated this feature during Chennai Floods and Manipur quake.