Astronomers have discovered that the exoplanet WASP-12b, considered to be a gas giant, does not reflect any light and hence is completely pitch black. The WASP-12b was discovered in 2008 and is considered one of the most important exoplanets as far as studies and research are concerned.

It revolves around the sun-like giant star WASP-12A which is situated at a distance of 1,400 light years from Earth. As WASP-12b was very close to the WASP-12A star, hence its gravitational pull stretched the giant exoplanet and converted it into an egg-like shape. Also, it increased the surface temperature of WASP-12b up to 2600 degrees Celsius during the daylight.

To get more information about the atmospheric composition of the exoplanet, Scientists measured the amount of light reflected by the WASP-12b, which is called as the albedo.
In 2016, Scientists tried to put their best step forward to determine the albedo by observing the planet at the time of eclipse when it was close to full phase and crossed behind its parent star. Through this, they were able to directly measure the amount of light reflected by the object.

Taylor Bell, from McGill University in Canada along with the colleagues, used the Space Telescope Imaging Spectrograph (STIS) technology on the Hubble Space Telescope to measure the albedo of WASP-12b’s at several different wavelengths. From this, researchers found out that the exoplanet’s albedo is only 0.064 and defined it to be darker than fresh asphalt. 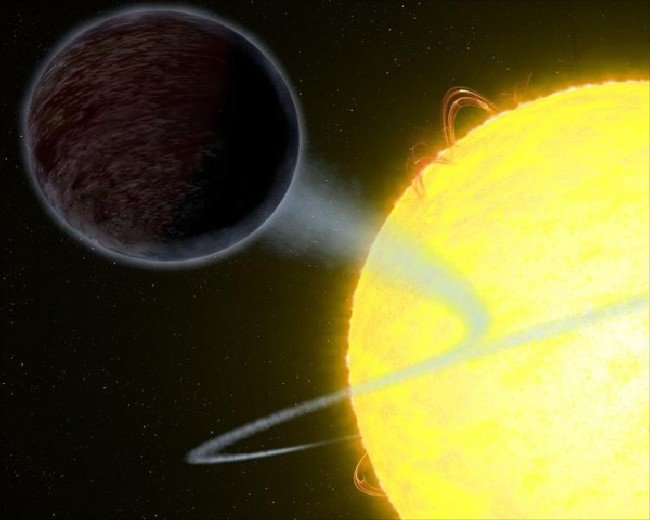 Scientists believed that the excess high temperature of the planet might have resulted in its low albedo because there is no chance of formation of hot clouds due to the extremely high temperatures and also the alkali metal get ionized. WASP-12b’s temperature is so hot that it could break hydrogen molecule into atomic hydrogen resulting in an atmosphere equivalent to that of a low-mass star. These type phenomena make the albedo very low.

Another gas giant named the HD 189733b was viewed to possess deep blue color, and its albedo measurements were quite different from WASP-12b. Scientists revealed that the WASP-did not show any color preference and looked like a red hot glowing planet because of excess heat.