Greater extent of mobile phone penetration in India has ultimately resulted in greater internet penetration across the country! Mumbai city however tops the list with the highest number of Internet users in India, ahead of cities like New Delhi and south sensations Hyderabad and Bangalore.

As per the data revealed by the Internet And Mobile Association of India (IAMAI), at 12 million, Mumbai has more internet users than any other city in the country. The economic capital of the country is followed by the national capital – Delhi , with 8.1 million users, followed by Hyderabad (4.7 million).

The Internet & Mobile Association of India (IAMAI) is a not-for-profit industry body registered under the Societies Act, 1896. Its mandate is to expand and enhance the online and mobile value added services sectors. 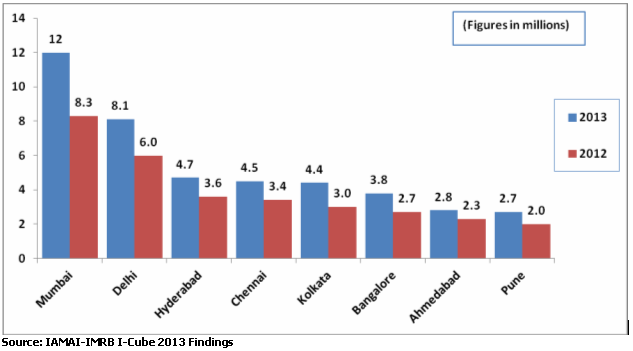 The association’s activities include promoting the inherent strengths of the digital economy, evaluating and recommending standards and practices to the industry, conducting research, creating platforms for its members, communicating on behalf of the industry and creating a favorable business environment for the industry.

Internet reach in Kolkata remains lower than other metros. What’s surprising is country’s IT hub Bangalore is placed at the sixth position in the list with 3.8 million users.

Mumbai’s Internet penetration has much to do with the population of as the agglomerate and adjoining areas are bursting with population. Agglomerate of Mumbai included in the study are Thane and Navi Mumbai. Other reason that counts for the large number of Internet users in the city is increasing awareness about Internet.

Easy access to internet on mobile phones has resulted in greater internet penetration across India, with smartphones available at a range of prices. Most phones now have internet. Many features on these phones will not be available without internet,” said Nilotpal Chakravarti, associate vice-president, IAMAI.

The study reveals most internet users are college-goers and surprisingly, housewives in India. The latter bracket uses smartphones to access the net, especially when it comes to browsing social networking websites.