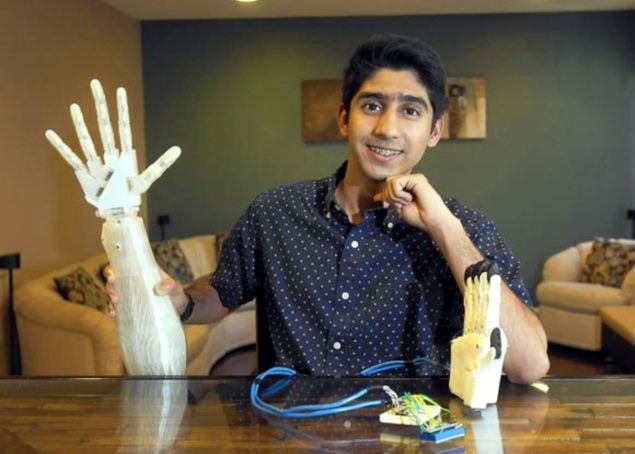 California: The 17-years-old Indian-origin, Nilay Mehta from the US made India proud by inventing a low-cost 3D-printed robotic arm that can be controlled by voice commands for his school science fair project.

Nilay Mehta, a pupil of Irvine High School in California, US has won six science fair awards for his invention that includes third place at an international fair held earlier this year.

He has also been awarded a Blue Ribbon Award – an accolade that recognises a student’s academic excellence.

The robotic arm created by Mehta is programmed to replicate movements’ of a human hand such as pinching, grabbing or holding a spoon. The hand can also simulate other common figurations.

Nilay shared that the robotic arm is made up of 3D parts and operates on voice command. The command can be made by speaking into the microphone attached to the arm to perform particular movements.

For instance you say spoon and the hand will make a shape that will be able to hold a spoon.

He said, “I knew I wanted to do something in prosthetics. One issue I saw is that there were no lower-cost options.”

He also shared that this creation of his will solves another problem- the ability to upgrade easily the prosthesis, especially for kids who have to change their prosthetics every six to eight months. He plans to develop further the robotic arm so that it can be tested with an amputee.