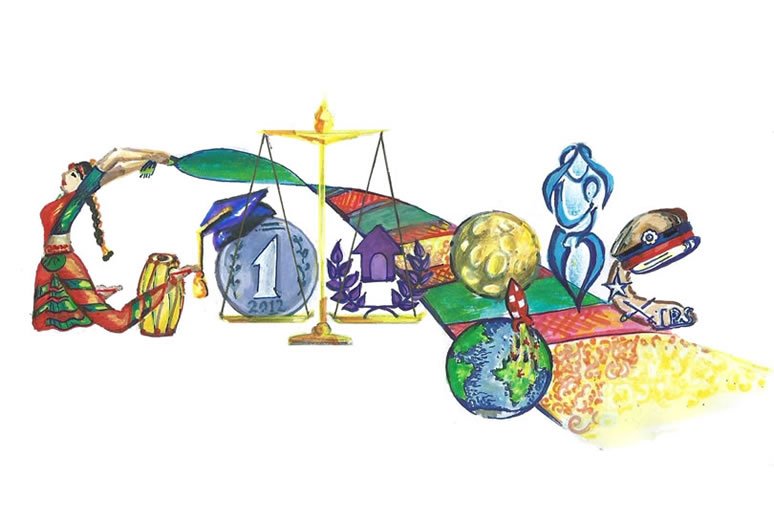 Hardly anyone would have thought that Doodle, an aimless drawing that one drew on sides of margin of a book during boring Chemistry classes would turn into trademark design of Google. The company uses doodle as a decorative logo on its search page and changes the design on marked occasions such as holidays, anniversaries and more.

Recently, a class 10 student from Pune was awarded for designing the doodle for Google India. The doodle designed by her for Doodle 4 Google is expected to go live on the Children’s Day, this month. The doodle titled “Sky’s the limit for Indian women” has been designed by Gayatri Ketharaman for the fifth edition of Doodle4Google competition with the theme celebrating Indian women.

Gayatri Ketharaman, a student of Bishop’s co-education school in Pune had to say the following,

“Each letter of the doodle depicts the trait of Indian women. She is graceful and elegant, adept at balancing work and home. She is a go-getter and also personifies motherhood”.

Google India Managing Director Rajan Anandan said, “The competition is the perfect platform for Indian youth to showcase their talent on an international platform. It allows youngsters not only from the metro cities but tier 2, 3 and even tier 4 cities to participate, which is evident from the entries seen this year.”

Other students who participated in the contest and made it to the winners list:

The winner were selected from among 12 finalists chosen from different parts of the country by the national jury comprising actress Kirron Kher and political cartoonist Ajit Ninan. The fifth edition of the contest, whose theme was “Celebrating Indian Women”, received 1.5 lakh entries from 1,500 schools across 100 cities.