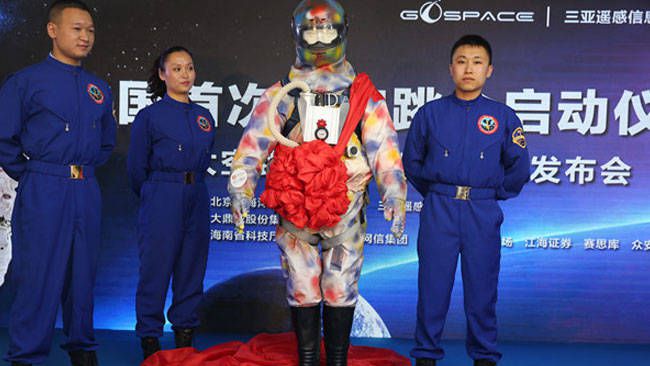 The Chinese firm, JHY Space Technology Co Ltd (Space Vision) has released its First – ever space parachuting suit and has hit on a business idea to send people into space and returning at 77,000 USD.

The firm is planning to send people into space using a high – tech balloon and bring them back to earth using a parachute that is developed by the company.

The company will test related equipment in the next few days.After that, the company will recruit more parachuting volunteers to train them. As reported by State- run China Daily.

The company also revealed the identity who will take the first challenge to visit space with the parachute suit. The first three challenges are an aircraft engineer, an entrepreneur and a champion woman parachutist. He Yufeng voluntarily become the first woman space parachutist in the world.

“I want to challenge Alan Eustace, the current world record holder for skydiving from 41,419 metres,” said He Yufeng.

The company explain that the challengers will soar into space in a high – tech balloon and will return in a parachute suit. The special suit has a radar, ground-based monitoring operation, image transmission system and space – ground communications system.

The Founder and the President of Space Vision- Jiang Fang said “we hope to lead the growth of domestic commercial aerospace sector by starting with space parachuting, and will gradually establish a route for the public to travel in space,”

The commercial space parachuting project trip will be launched in Sanya, Hainan province, where the island has ocean and space resources with clean air and a space launch centre.The trip will cost around 500,000 Yuan.

Hainan is also working on its comprehensive space travelling Industry, and China is also hoping to become an aerospace power by 2030.